Crude oil prices steadied in Asia on Wednesday but remained essentially subdued following news of a surprise US stock build in the previous session.

Inventories rose by 4.7 million barrels in the week to December 13, to 452 million, according to the American Petroleum Institute. The market had been looking for a drawdown of more than a million barrels.

Still, US crude prices remain above the psychologically important $60.00/barrel point, if only now by a whisker. The market remains supported by hopes for a trade deal between the US and China which could see big increases in forecast energy demand. However, investors are well aware that substantive settlement, as opposed to mere formalized truce, will be some way off if it is achievable at all.

For now, those worries may take a back seat as the market looks to more stockpile numbers from the Energy Information Administration. They’re due later Wednesday.

Prices remain within a well-defined weekly uptrend channel which has endured since the end of September as the markets anticipated, and then got, commitments to deeper production cuts from traditional producers. 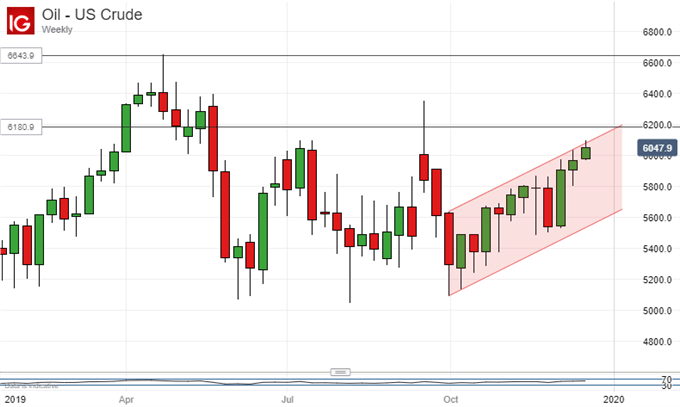 However, prices will need to get sustainably above the $62 mark if they’re to revisit the trading band which saw them reach for April’s peaks in the $66 region. This could be a big ask as markets thin out for the holiday season but it seems at least that oil is headed into that season with the bulls in overall control.

Gold prices held up through the Asia Pacific session. Strong US numbers from Tuesday failed to support regional stocks as investors worried that the Brexit deadline proposed by the UK government could increase the chance that the country will break away from the European Union without a deal.

US manufacturing expanded sharply last month, while housing numbers rose more strongly than expected as did housing construction permits. Investors remain wary of progress in trade talks and Brexit, however. While they are, gold seems unlikely to materially retreat.

There are a couple of likely global risk events coming up which may move the gold market on Wednesday. UK consumer price inflation figures are coming up. They’re expected to hold steady. New European Central Bank President Christine Lagarde is due to speak, with markets still trying to get a steer on her style and intentions as she takes over from the long-serving Mario Draghi. 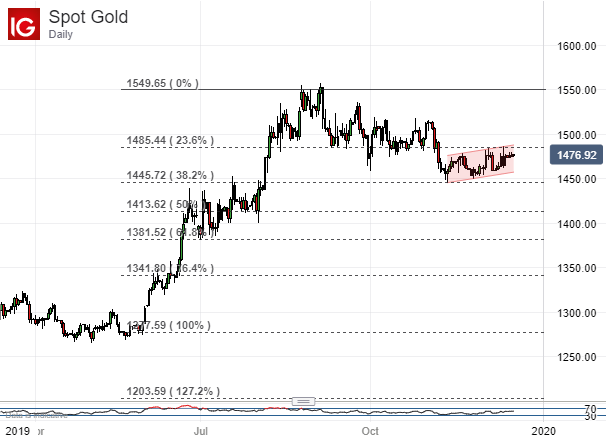 However, a look back a little finds prices actually quite neatly corralled in a broad range between the first and second Fibonacci retracements of their rise up from the lows of May to the peaks of September.

Despite the clear underlying near-term bullish pattern here, the downtrend from those peaks remains very much in place. This market may not see a decisive break either way until new year but, barring bad news on the trade front, it would not be surprising to see that downtrend reassert itself.