An important opinion poll ahead of Thursday’s UK General Election has raised the chances of a “hung” Parliament, with neither the ruling Conservative Party nor the opposition Labour Party winning an overall majority. The 28-seat Conservative majority predicted by pollsters YouGov, down from 68 two weeks ago, is so narrow, according to YouGov, that Prime Minister Boris Johnson could fail to win an outright majority given the uncertainties inherent in forecasting – an outcome that could delay Brexit.

The poll uses the so-called multi-level regression and post-stratification (MRP) modelling approach that is regarded by some as more accurate than conventional polls and its publication led to a drop in GBP/USD, although a clear direction for the pair is unlikely until after the exit poll due soon after 2200 GMT Thursday. 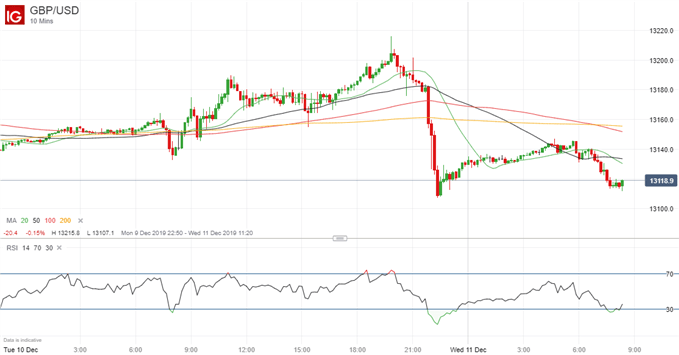 Johnson’s Get Brexit Done slogan has dominated the Conservative campaign whereas Labour is seen as less committed to the UK leaving the EU, offering to negotiate a softer Brexit deal that would then be put to the public in a second referendum.

However, doubts remain about whether even the Conservatives can negotiate a clean break with the EU by December 2020. A report in the Financial Times earlier this week quoted a Department for Exiting the EU document seen by the newspaper as saying that a new customs arrangement for Northern Ireland may not be ready in time.