The Australian Dollar understandably treated higher Chinese inflation data with a grain of salt, awaiting more top-tier event risk this week. The nation’s consumer price index clocked in at 4.5 percent y/y in November versus 4.3 anticipated, surging to the fastest pace of inflation since September 2011. Producer prices contracted about 1.4% y/y versus 1.5 expected, slower than the 1.6 outcome in October.

The 19.1% y/y increase in food prices played a key role in today’s result. That was quicker than the 15.5% gain last month. This can be attributed to a 110% climb in pork prices compared to a year ago, that was the fastest pace since 2012 amid a shortage. Core measures of price growth are more restrained. The cautious cooldown in wholesale deflation also followed an upbeat month in key readings of manufacturing PMI.

As the market’s favored China liquid proxy, the Australian Dollar is often sensitive to data out of the world’s second-largest economy. The country is after all Australia’s largest trading partner, and higher CPI could result in a more restrained tone from the People’s Bank of China on stimulus measures. That may perhaps come back into focus after a plethora of important events pass in the days and week ahead.

The sentiment-linked Aussie will be closely eyeing the Federal Reserve rate decision, UK General Election and the December 15 tariff deadline related to ongoing US-China trade talks. The former will be scrutinized by markets as updated economic projections clash with the outlook for easing in 2020. There is also the risk the UK Conservative Party fails to obtain a majority at elections, derailing near-term Brexit deal hopes.

So where does the Australian Dollar sit against a couple of its major counterparts, such as the US Dollar and Japanese Yen, from a technical perspective?

AUD/USD appears to be stalling and once again on the verge of resuming the downtrend that has been prevailing since early 2018. The US Dollar could resume its advance after resistance held, leaving behind a psychological barrier between 0.6846 and 0.6862. This is while descending resistance from December 2018 guides the pair lower. Immediate support sits below at 0.6754. 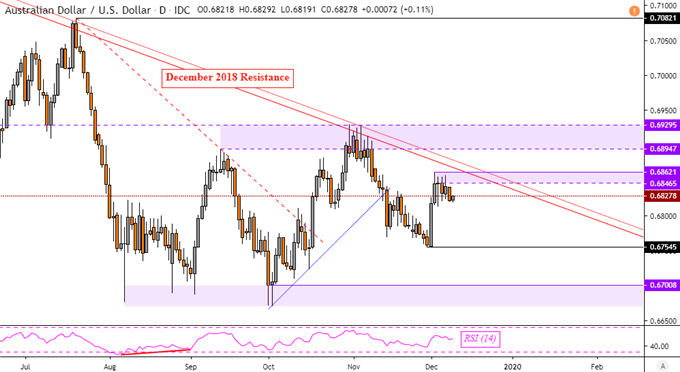 The AUD/JPY also may be on the verge of turning lower. Prices have just broken under a Rising Wedge. This is typically a bearish chart pattern, but further downside confirmation is needed from here. A daily close under 73.35 could pave the way for revisiting lows from September and October. Near-term resistance is a range between 74.48 to 74.84. 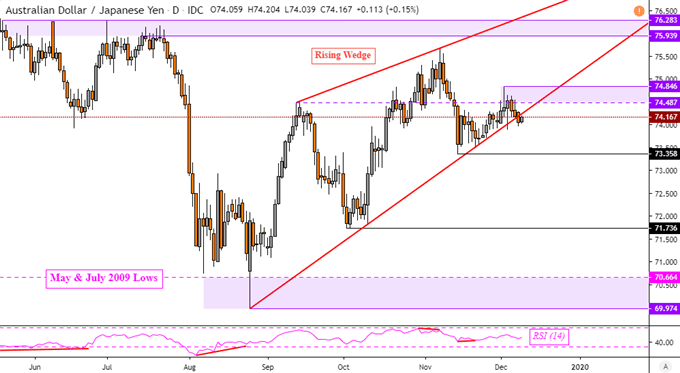