The latest Survation poll of UK voting intentions published Monday shows the UK Conservative party extending its lead over Labour to nearly 14 percentage points, indicating a working majority in parliament for PM Boris Johnson. The Survation poll was the most accurate poll in the 2017 General Election.

This follows on from a weekend Opinium poll for the Observer newspaper that showed the Conservatives holding a 15-point lead. The Guardian newspaper’s poll of polls – an equally-weighted poll of polls over a moving 14-day period – shows the Conservative party with a 10-percentage point lead, ahead of Thursday’s General Election.

Sterling continues to price-in a Conservative government with a working majority and is testing levels against the US dollar last seen in early May. Above here the March high at 1.3382 comes into view, and a print here would see the 14 big figure sell-off seen between March and early-September completely re-traced. Sterling’s downside remains very limited unless the polls prove to be inaccurate and Johnson does not gain a working majority on Thursday.

The IG Client Sentiment indicator shows traders are 55% net-short GBP/USD, which normally would give us a bullish contrarian bias. However, recent daily and weekly changes currently give us a mixed outlook for GBP/USD. 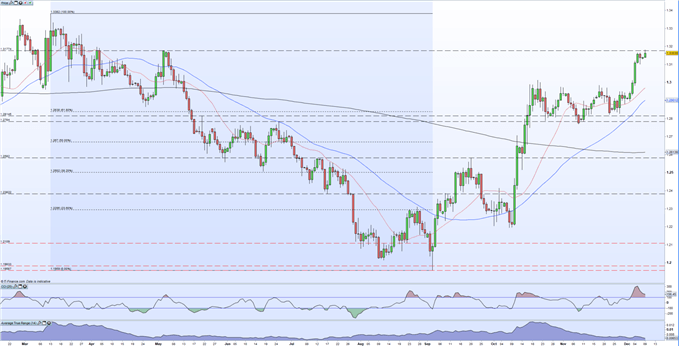