The Australian Dollar held up Monday following news of a fourth straight expansion in China’s private manufacturing output. A week of crucial domestic matters for the currency may have limited the impact of this data.

November’s Caixin Purchasing Managers Index for the sector came in at 51.8 for its best reading since late 2016. It was above market expectations which were for 51.5, and just better than October’s 51.7. This was also an encouraging fourth consecutive month above the line as , in the logic of PMIs, any reading over 50 signifies expansion.

The official version of the data, which covers the large, state-owned firms, was released last Saturday and revealed an unexpected if very modest return to growth, for the first time in seven months. That reading was 50.2, up from 49.3.

The Caixin headline covered a decidedly mixed picture, however. New orders were at their lowest since September, but employment expanded for the first time in eight months. It may also be that the firms surveyed by Caixin are and always have been less susceptible to trade-war winds than their larger exporting cousins.

AUD/USD had been gaining through the Asian morning and continued to so after the numbers. It’s doubtful that they impacted it the pair very much, however, with delayed reaction to the weekend’s official PMI likely behind gains for commodity currencies and equity. 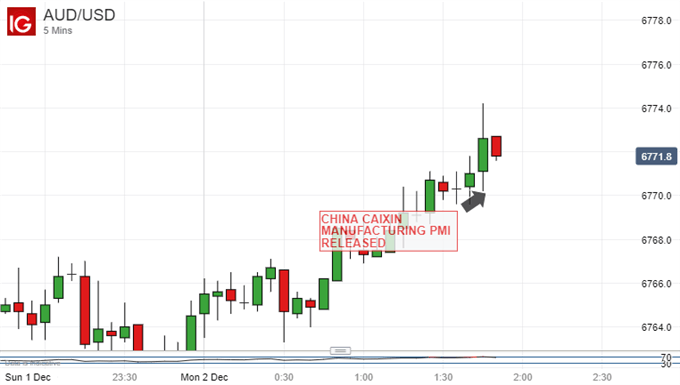 For sure the Australian Dollar can act as the foreign exchange market’s favorite liquid China proxy given its home country’s huge export links to the world’s second-largest economy. As a pro-cyclical unit likely to do well when investors feel better about global growth prospects it has also been closely tracking the torturous US-China trade war story closely.

However, the falls seen in AUD/USD since the start of November have had their source a little closer to home in good, old fashioned interest-rate differentials with the United States. 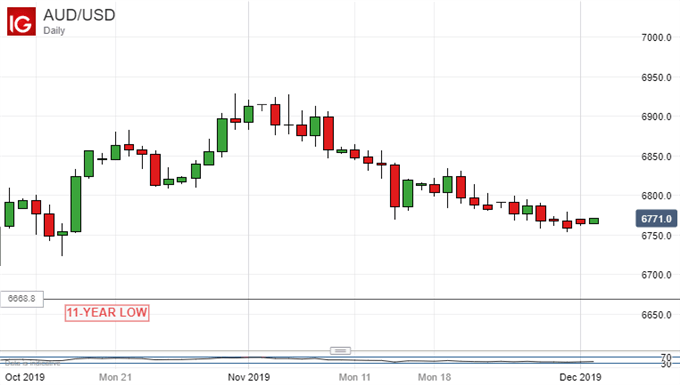 The US Federal Reserve has steadfastly refused to underwrite a series of interest rate reductions and left them instead entirely dependent on the economic data. Meanwhile the Reserve Bank of Australia has done nothing to disabuse futures markets of their expectation that the next move for record-low Australian interest rates will be another cut.

The markets don’t think that’s coming on Tuesday, however. That’s when the RBA will give its last policy decision of the year. However, its current thinking will be eagerly awaited as will Wednesday’s official growth figures. They’re already attracting nervous glances given the weakness of business investment.

This stands to be a week in which the home economy looms very large for the Aussie.