Northern Ireland’s Democratic Unionist Party, which supported the ruling Conservatives in the last UK Parliament, has launched a manifesto for the December 12 UK General Election that opposes key elements of the Brexit deal agreed between UK Prime Minister Boris Johnson and the EU.

While the DUP is a relatively small group in the UK Parliament, winning 10 seats in the 2017 General Election, it has played an important role backing the Conservatives. Were the election to result in another hung Parliament, with no party winning an overall majority, that backing seems unlikely to continue with the DUP strongly critical of any Brexit deal that treats Northern Ireland differently from England, Scotland and Wales.

While that is potentially an obstacle to the UK leaving the EU with a deal, it has had little impact on GBP/USD, which tends to advance on opinion polls suggesting the Conservatives will win the election outright and decline when the main opposition Labour Party looks to be catching up.

For now, GBP/USD continues to trade within a narrow band between 1.30 resistance and support just under the 1.28 level. 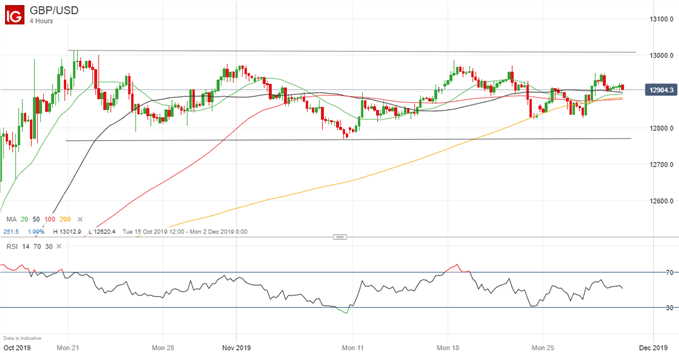 Launching the DUP manifesto, it said it will seek changes to the deal if Johnson remains Prime Minister and presses ahead with a deal that includes special arrangements for Northern Ireland, including a consent mechanism that would see the Northern Ireland Assembly given a simple majority vote on how the rules on customs arrangements in Northern Ireland would work after Brexit.

At the launch in Belfast, deputy leader Nigel Dodds said the deal would be dangerous “to the economic and constitutional position of Northern Ireland”. Its leader Arlene Foster added that ifJohnson was returned as prime minister, the DUP would reiterate that unionism in Northern Ireland was united in its rejection of the deal, and would seek to secure further changes to it.