The Swiss Franc has weakened against the US Dollar and many other major rivals since August and its case is unlikely to be helped Thursday by further evidence that US-China trade tensions are hurting Switzerland.

Still, if market forecasts are right, that evidence is about to be served up in the shape of official Swiss third-quarter Gross Domestic Product data. It’s coming up at 0645 GMT.

Those forecasts suggest that on-quarter growth will be just 0.2%. That would mark a deceleration from the second quarter’s hardly stellar 0.3% gain and the weakest performance since the final quarter of 2018. Back then the economy posted a second straight quarter of contraction.

Admittedly annualized growth is expected to pick up markedly. The market expects a rise of 0.8%. That is admittedly not much to show for a year. But it would be much better than the woeful 0.2% recorded in the previous quarter, the weakest print since the end of 2009.

Many Factors Conspire Against the Franc

While the Swiss currency will always retain its haven appeal, there is clearly much working against it now. On the most basic level its own central bank has long tried to weaken it, to drive out haven seekers and keep Swiss produced goods competitive internationally. The Swiss National Bank’s key policy rate has been minus 0.75% since 2015.

There’s a marked contrast here with the Federal Reserve’s refusal to underwrite a series of interest rate cuts and to leave its own policy data dependent. In short, you’ll get better returns in almost any currency than the Franc in all but the direst of circumstances.

Moreover, earlier this month the Organization for Economic Cooperation and Development downgraded its Swiss growth expectations to 0.8% this year and 1.4% next, from 1% and 1.5%, respectively. It squarely blamed anemic foreign trade and investment although it did point out that high employment and resilient consumption would probably help.

Of course, the Franc’s immediate fate hinges on the flow of US-China trade headlines. The markets’ current base case seems to be that an interim ‘phase one deal’ is possible. This may amount to no more than a formalized truce in any case, but this thesis has supported risk appetite and further weakened perceived havens like the Franc. 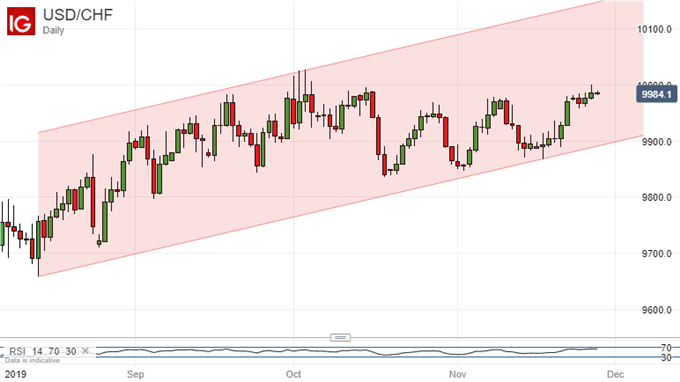 Whether it will survive US President Donald Trump’s decision to sign into law legislation supporting pro-democracy protesters in Hong Kong must remain to be seen.

The Swiss currency has also weakened against obvious ‘risk-on-plays like the Australian and Canadian Dollars as trade hopes have built. 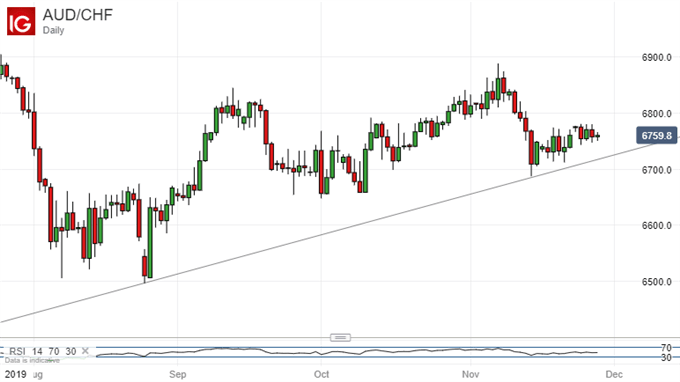 Of course, sentiment here can flip completely on a headline or Tweet from any of the main protagonists or their media outlets. Moreover, there are sufficient other major market uncertainties, including of course Brexit, which may mean that haven assets catch a bid at any moment.

However, if Wednesday’s GDP data come in as predicted and fulfill the prophecy of outfits like the OECD, it’s hard to see the Francs’ clear underlying weakness changing anytime soon.