Focus on the US-China trade war has temporarily shifted, although not off the topic of tariffs. This time, US President Donald Trump has turned his attention to the European Union. By all accounts, it appears that a new front will open in the US-led trade wars.

Much like the reaction of the Chinese Yuan around negative US-China trade war headlines, the Euro took a dive below 1.1000 versus the US Dollar during the thinly-traded pre-Thanksgiving holiday session. There has been some speculation that a response to the French digital tax may only be the beginning of an expanded EU-US trade war. If so, more weakness for the Euro may be on the way. 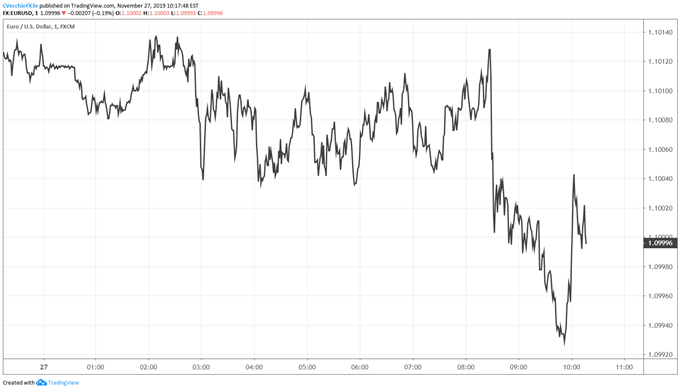 Following the news report, EUR/USD dropped from its near-session highs at 1.1013 to fresh session lows at 1.0993. At the time this note was written, EUR/USD was back at 1.0999. Although the Thanksgiving trading period tends to be quieter, it’s important for traders to remember that something as simple as a tweet could upend a low volume market very easily.