Markets remain largely unchanged after the Conference Board’s Consumer Confidence Survey dropped to 125.5 for November – the fourth consecutive drawdown for the index. The Dow Jones Index moved modestly lower subsequent to the Consumer Confidence report release. This followed the Dow and other US stock market benchmarks like the S&P 500 and Nasdaq all printing fresh record highs in early morning trading. While consumer confidence declined this month from the prior reading of 125.9, consumer expectations over the short-term climbed to 97.9 from 94.9 as consumers grew slightly more optimistic about the economy. 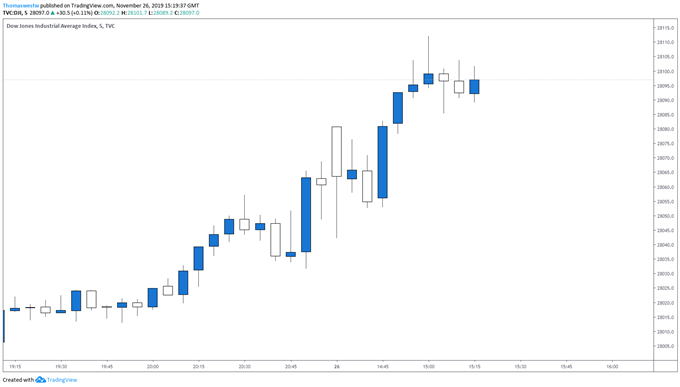 USDCHF, a proxy for market risk appetite, ticked down slightly following the consumer confidence data release and indicates a pause in upbeat sentiment. While market participants remain keenly focused on the latest US-China trade talk headlines, which have broadly helped bolster equity indices to record highs, the impact of ongoing trade war uncertainty has nonetheless weighed on business investment and hiring decisions. Also, ambiguity over a potential US-China trade war resolution could have an adverse effect on consumption ahead of the quickly approaching holiday shopping season. Nevertheless, consumer spending so far seems widely unfazed, but a recent retail sales report revealed a sharp slowdown in month-on-month growth. Other cracks in the US economy are also starting to show up like the manufacturing sector remaining in contraction territory while there may be signs that the US labor market is beginning to come under pressure. Correspondingly, the US Dollar could face downward pressure if the American economy fails to match FOMC forecasts for US economic outlook. 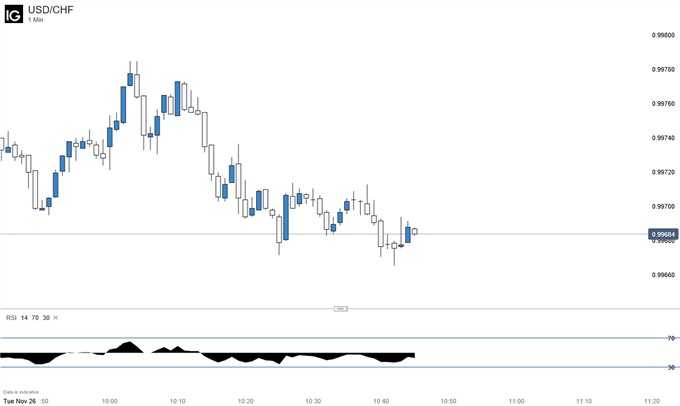 Expectations in the Conference Board survey ticked up to 97.9 for November, up from 94.5 in the previous month, largely on upbeat income expectations. Seeing that US economic growth is overwhelmingly driven by consumers, however, the robustness of America’s economy should remain intact if consumers are optimistic about their income and are willing to spend.

On that note, those anticipating fewer jobs in the coming months decreased notably from 18.0% to 13.2%, but the proportion of consumers expecting more jobs in the months ahead decreased from 16.9% to 15.7%. Likewise, consumers responding that jobs are ‘plentiful’ decreased from 47.7% to 44.8% and those saying jobs are ‘hard to get’ rose from 11.6% to 12.7%. Income prospects shifted higher with 21.8% expecting an increase in their wages, which is up slightly from 21.4% previously. 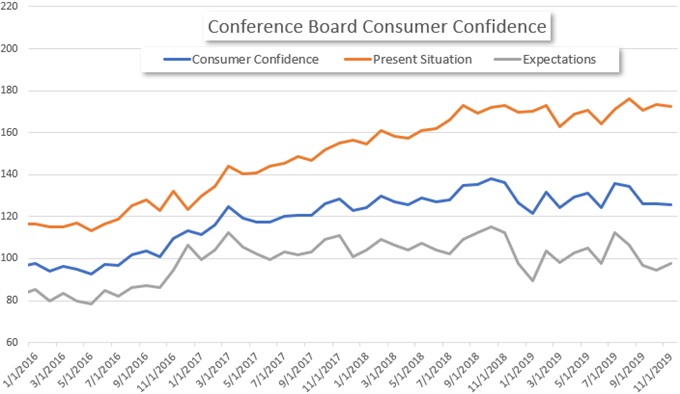 With markets printing all-time highs on trade war hopes almost daily – as clearly pointed out by tweets from President Trump – the coming months could be quite decisive for the market’s direction. There is an outstanding risk that holiday spending disappoints, which could destabilize the recent rally in stocks, considering consumer spending is a primary economic driver for the United States.

A stark drop in willingness to spend, should it manifest, would raise an alarming red flag. This could, in turn, grab the attention of the Federal Reserve to provide more accommodation (i.e. monetary stimulus) as the central bank aims to sustain the US economic expansion and insure against downside risks that stem overwhelmingly from the ongoing US-China trade war.