The battered Australian Dollar might get some help from Reserve Bank of Australia Governor Philip Lowe later on Tuesday when he speaks in Sydney.

His theme is ‘Unconventional Monetary Policy: Some Lessons from Overseas,’ and he’s touching on it at an apt time for his homeland.

Australia emerged from financial crisis perhaps as strongly as any developed economy and with its banking system in better shape. Australian monetary policy has thus remained ‘conventional.’ That means it has relied solely on interest rates for its impact, with none of the rampant quantitative easing, negative interest rates and yield-curve control so liberally deployed elsewhere.

However, Australian interest rates have been cut to record low after record low. They fell below 1% in October. Meanwhile consumer price inflation remains stubbornly below the RBA’s 2-3% mandated target. If it stays that way, it’s hard to see the RBA avoiding further reductions. Indeed the last set of minutes from one of its policy meetings rather shocked markets by suggesting that the case could have been made for lower rates this very month.

But here’s the difficulty. Those ‘lessons from overseas’ must be warnings. Unconventional monetary policy may have shored up financial sectors, and that is of course important. But it hasn’t bought durably higher pricing power. Wherever you care to look, really, from the US to Europe and on to the most obvious case, Japan, trillions of dollars’ worth of quantitative easing has not pushed inflation durably back to target.

Moreover, Mr. Lowe’s RBA is very realistic about the diminishing returns on offer out here at the far end of the policy easing road. At the start, easier money has a clear stimulus effect. However, after time, consumers and businesses are already highly leveraged, their appetite for more debt constrained.

The Australian Dollar has risen in the past when Mr. Lowe has pondered the natural limits of monetary policy. Given that the experience of unconventional measures overseas may well lead him to do the same when he speaks, investors should be on watch.

By the same token the ASX200 could face a headwind or two if markets sense reluctance to ease on the part of the RBA. The Sydney stock benchmark is close to its record highs of July but has just traded above an important zone which tends to be regained quite shortly whenever it is left, either to the upside or the down.

It is important not to overstate this. The RBA has sounded ‘dovish’ on interest rates in the recent past and will, of course, take steps to fulfill its mandate. AUD/USD has crumbled since October as investors have taken this on board. 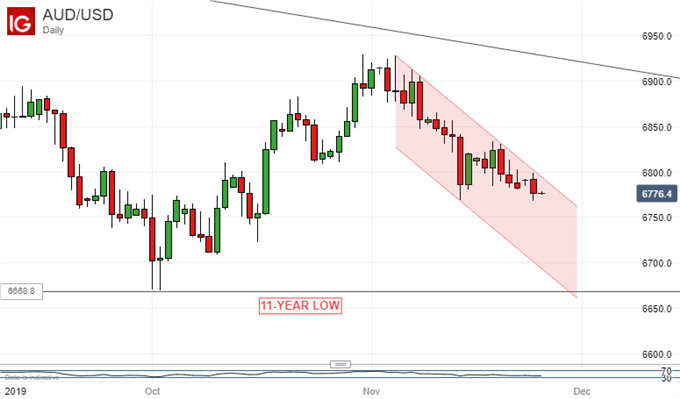 However, if Mr. Lowe does again point out that monetary support has its limits, and that the government will have to do its bit from the fiscal side, the Aussie could find some near-term support.