The US Dollar and Japanese Yen may rise against their major counterparts if the OECD economic outlook spooks markets, putting premium on haven-linked assets and a discount on their riskier counterparts. Shaky US-China trade talks may amplify the Yen and Greenback’s rise especially after the US Senate unanimously passed a controversial bill in support of the Hong Kong protesters. Now, traders are waiting for China’s reply.

OECD Outlook: More Doom and Gloom or Scope for Hope?

The OECD’s bi-annual economic outlook already carried gloomy overtones when the first issue was published in May and the upcoming one will likely magnify concerns about global growth and financial stability. Much like the IMF and World Bank’s analyses, the OECD’s report will likely stress the negative impact of the US-China trade war with an underlying urgency to reduce tensions before it potentially triggers a financial shock.

“More than 50% of the non-financial corporations’ debt being issued is only one level above the limit of investment grade and could easily migrate below investment grade in the face of a systemic shock” - OECD.

The last report stressed a need to return to a “transparent, predictable and rules-based trade” framework as a way to boost growth and cross-border investment. The uncertainty from US-Sino economic conflict has not only disrupted cross-border supply chains but also stifled job creation. It is no surprise that central banks in both developed and frontier economies have embarked on easing cycles to counter disinflationary pressure.

While US-China trade tensions temporarily cooled for a month or so and helped restore faith in the fundamental outlook as well as buoy sentiment, the recent fallout between the two may undermine the market’s optimism. Now, markets are doubting whether Beijing and Washington can secure “phase 1” in their multi-sequential trade accord before year-end. 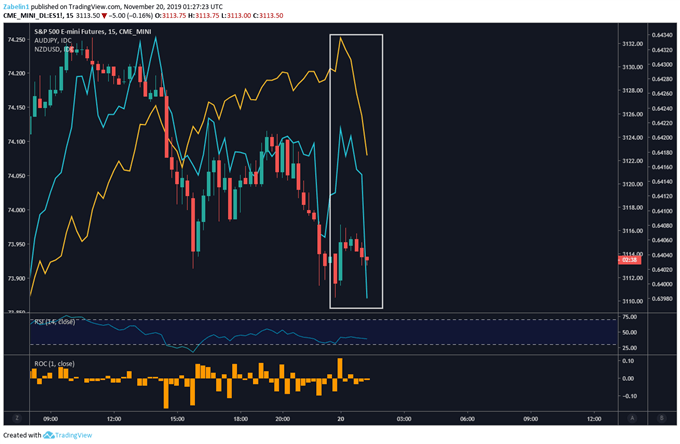 The Fed has also been keeping a close eye on the US-China trade war as the economic conflicted has pushed the manufacturing sector into an “industrial recession” to quote Fed Chairman Jerome Powell. The FOMC minutes from the October meeting revealed that officials are expressing concern that inflation expectations could fall further amid “elevated” downside risks.

The US Dollar ended the day modestly higher against its major counterparts despite a rise in rate cut expectations for 2020. Coupled with souring sentiment from recent trade war developments, the Greenback’s rise may have been more the result of increased demand for haven-linked assets than expectations of future hikes. Overnight index swaps are currently pricing in a better-than-even chance of a cut as soon as March. 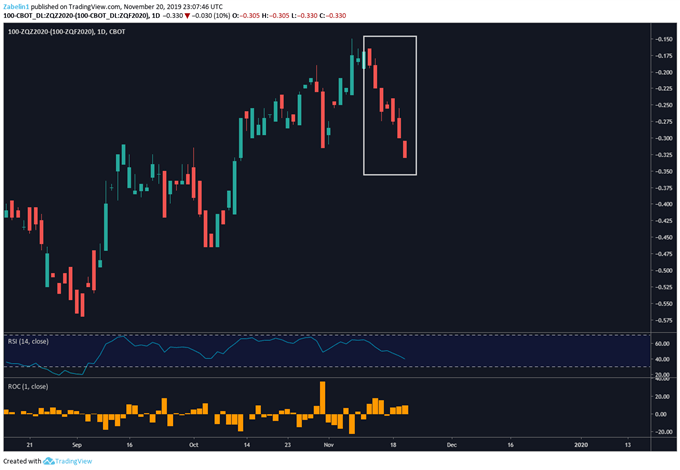 Leveraged Debt: is the Financial System at Risk?

While some FOMC policymakers did see a decreased likelihood of a recession, there was yet another alarming message sent out about rising corporate debt. In the IMF’s bi-annual Global Financial Stability Report, analysts warned that approximately 40 percent of corporate debt in major economies could be at risk of default in the case of a global downturn.

In other words, borrowers with $19 trillion worth of debt may suddenly become delinquent. This exceeds the levels reached during the financial crash. An environment of low rates has led yield-starved investors to take on greater risk, exposing themselves to precarious financial instruments. The rapid issuance of covenant lite loans that are being converted in collaterilzied loan obligations is giving policymakers a nauseous memory.