GBP slips back after TV debate dominated by Brexit

UK Prime Minister Boris Johnson was marginally weaker than the Labour Party’s Jeremy Corbyn in the first televised debate between the two leaders ahead of the December 12 UK General Election, according to pollsters YouGov.

The debate, broadcast by ITV, was dominated by Brexit in the first half before switching to issues such as the National Health Service. According to YouGov, viewers think Johnson was stronger during the debate on Brexit (63% to Corbyn’s 27%), while the Labour leader performed better on the NHS (54% vs 38%). Overall, most viewers think both leaders performed well, but Corbyn edged out Johnson by 67% to 59%, YouGov added.

Looking at Sterling, which tends to rise when Johnson’s Conservatives appear more likely to win the election, GBP/USD eased back, again rejecting resistance at 1.30. 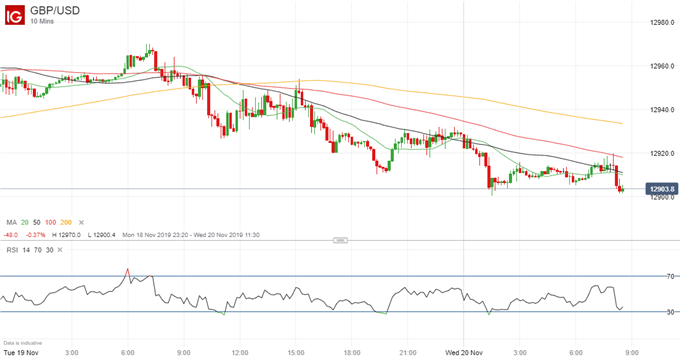 As for EUR/GBP, that edged higher, remaining above support just above the 0.85 level.

Meanwhile, a row is breaking out after the Conservative Party changed the name of one of its Twitter accounts to make it look like a fact checking service during the debate.The Conservative Campaign Headquarters press office account changed its name to “factcheckUK” from its usual “CCHQPress” and switched its avatar to a white tick against a purple background.

According to the latest polls, Conservative Party support currently stands at around 42%, with Labour at around 30% and the Liberal Democrats on 15%.