The price of oil is taking a nosedive as the US trading session comes online with the commodity on pace to drop over 1.5%. I noted earlier this month that crude oil prices looked primed for a reversal when I detailed how crude oil charts were approaching key resistance levels while oil fundamentals were showing signs of potential deterioration. Crude oil bulls are now trying to stymie the selloff and cling onto its rising support line near 55.75 after a hard rejection at the 58.00 handle. Though the latest headlines out of Russia – a member of OPEC+ and a country that produces 11% of the global oil supply – presents a bearish headwind for crude oil price outlook.

Specifically, a Reuters report stated that Russia is unlikely to deepen oil production cuts if asked by OPEC at the oil cartel’s upcoming summit in Vienna on December 05. However, the report mentioned that Russia would likely agree to extend existing oil supply cuts OPEC+ agreed to earlier this year in aims of rebalancing the oil market amid ebbing demand for petrol due to slowing global GDP growth driven primarily by ongoing US-China trade war uncertainty. 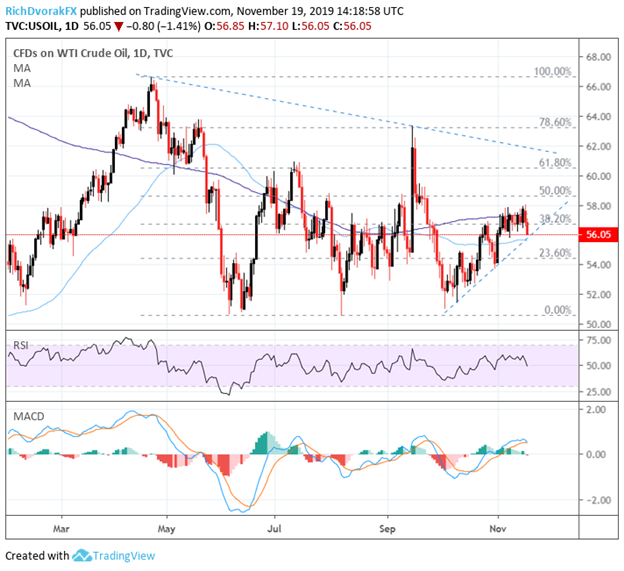 Crude oil prices are currently probing the support trendline that connects the series of higher lows recorded since early October. This follows a breach of confluent support provided by the 38.2% Fibonacci retracement level of the commodity’s bearish stretch from April 23 to June 05, which came subsequent to a sharp reversal at the 200-day simple moving average. The price of crude oil could face further selling pressure in the near future as technicals weaken and bearish momentum gains pace as suggested by the MACD indicator. If support provided by the ascending trendline fails to keep crude oil prices buoyed, the 50-DMA near 55.50 comes into focus as the next potential level of defense. 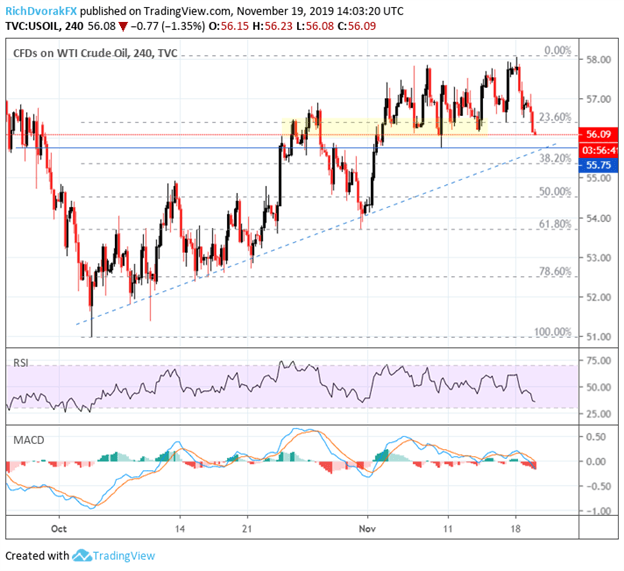 While the abrupt reversal in crude oil is worrisome, technical support with potential of thwarting the ongoing selloff is plentiful. Most notable is the 55.75 price level highlighted by the November 08 intraday swing low. Slightly beneath this area is the zone of confluence underpinned by the 38.2% Fibonacci retracement of crude oil’s trading range since the October 03 low, which may also keep the price of crude oil afloat. Below this area, however, selling pressure has potential to accelerate quickly and target the 54.00 handle. 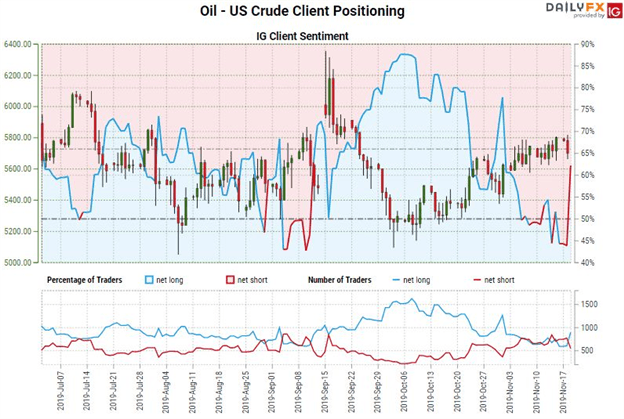 Also noteworthy is the latest change in trader positioning detailed in the IG Client Sentiment Report. In fact, 61.96% of retail crude oil traders are net-long the commodity resulting in a long-to-short ratio of 1.63 to 1. Moreover, the number of traders net-long is 31.34% higher than yesterday and 25.61% higher relative to last week while the number of traders net-short is 26.40% lower than yesterday and 13.06% lower relative to last week. As such, the recent changes in retail trader positioning suggests a stronger bearish contrarian trading bias.