After enjoying a relatively robust performance in the first ten months of the year, the Canadian Dollar has recently conducted an about-face and slipped against its major counterparts. The maneuver occurred at the Bank of Canada’s rate decision on October 30, where BOC Governor Poloz outlined the case for potential rate cuts. Since the decision was somewhat unexpected, or perhaps just sooner than expected, the Canadian Dollar slipped significantly, and the longer-term outlook may have shifted in lockstep.

Canadian Dollar in the Year-to-Date 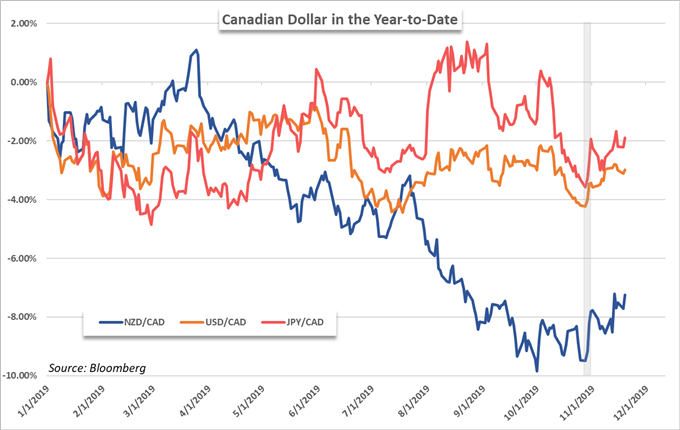 With that in mind, pairs like USD/CAD, CAD/JPY and NZD/CAD have undergone significant shifts in momentum and each looks to threaten longer-term technical levels as traders look to discover the appropriate value for the Canadian Dollar given the central bank’s expected policy path. Similarly, upcoming economic data like Canadian CPI and a speech from Governor Poloz could provide the spark necessary to break the various technical barriers on each pair or confirm that the currency’s longer-term bullish trend remains intact. 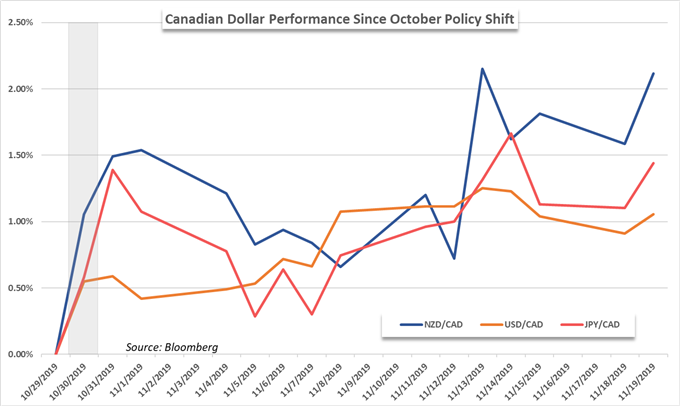 USD/CAD Forecast and Levels to Watch

Turning to USD/CAD, recent price action reveals a steady climb in November – despite the more tepid performance of the broader Dollar Basket (DXY). Consequently, the pair has moved within range of the 200-day simple moving average to the topside, which recently helped keep a lid on further gains. With the upcoming data however, the 200-day may be at risk once more.

To that end, 1.3268 could play an important role in rebuking an extension higher, while subsequent resistance will look to materialize around 1.3350 if the moving average is surmounted. Beneath the current spot price, the pair may enjoy support around 1.3133 prior to the more-formidable support in the 1.3020 area.

CAD/JPY Forecast and Levels to Watch

Prior to the Bank of Canada’s renewed dovishness, the Japanese Yen was one of the Canadian Dollar’s staunchest opponents - with the pair flat for the year as recently as mid-October. Unlike many of the other major central banks, the Bank of Japan has been decidedly dovish for years, which has left it as a stable counterpart. With that said, CAD/JPY could prove to be one of the more clear-cut examples of the impact from the Bank of Canada’s policy change. Thus, CAD/JPY could be an attractive option for bearish Canadian Dollar strategies.

Technical levels to watch are the nearby 200-day simple moving average at 81.81 which is a few pips above horizontal support at 81.63. Given their proximity, it is likely the two levels will work in tandem to try and keep the Canadian Dollar afloat before deeper losses can look to target support at 81 and 80. Meanwhile, resistance will reside just north of 83 – an area that has kept CAD/JPY in check since May.

NZD/CAD Forecast and Levels to Watch

Unlike CAD/JPY, the New Zealand Dollar has suffered immensely compared to its Canadian counterpart throughout 2019 – largely due to the same reason the Canadian Dollar has fallen recently. The Reserve Bank of New Zealand has been engaged in a race to the bottom with the Reserve Bank of Australia as the two South Pacific nations look to lower rates further. While the RBNZ and RBA suggested recently that further cuts are off the table, disappointing employment figures from New Zealand have called the central bank’s position into question.

Quasi-confirmation was received on Tuesday as the RBA announced it is “prepared to cut rates further if needed,” which could suggest the RBNZ is not far behind. As it stands, the market sees a 37% chance of a cut from the RBNZ at its February meeting. Given the fluidity of the fundamental backdrop of NZD/CAD, it may be prudent to turn to technicals for insight which reveals a potential bullish-breakout unfolding for the Kiwi.

Probing the descending trendline originating from March highs and horizontal resistance from various swing-highs and lows, NZD/CAD is showing signs of bullish intent. If the pair can confirm a break above the 0.8502 area, it could open the door for an extended push higher. That said, upcoming data will likely deliver the deciding blow that could see NZD/CAD move to the 200-day moving average above 0.86 or back down to support around 0.8250. In the meantime, follow @PeterHanksFX on Twitter for updates on the various Canadian Dollar crosses.