Crude oil prices were little moved in Monday’s Asian session, but they did inch higher and, more importantly perhaps, more than hold on to last week’s gains.

All markets are still largely driven by the US-China trade story. There were signs of progress over the weekend even if caution is always warranted. Chinese Vice Premier Liu He reportedly spoke by phone to US Treasury Secretary Steven Mnuchin and Trade Representative Robert Lighthizer regarding a ‘phase one’ trade deal.

Chinese state media company Xinhua said that constructive discussions were had over the core concerns of both sides and that the call was instigated by the US. Risk appetite was stoked by this news with most Asian equity markets higher despite ongoing unrest in Hong Kong.

In a light data week, the next major hurdle for markets may come in the form of Tuesday’s minutes of the last Reserve Bank of Australia monetary policy meeting. The central bank’s views on the likelihood of any future interest rate cuts will of course be at a premium but the whole release may have been eclipsed by last week’s news of surprise labor market weakness. The week will also see the release of Federal Reserve minutes which will be of much broader interest.

Clearly this release may not affect energy markets directly but rather via any overall risk appetite shift they may bring.

Gold prices were rather more subdued, with the equity led recovery in optimism taking it usual toll on perceived haven assets. Its highly probable that events in Hong Kong are keeping gold bears in check though, and its doubtful that the current crop of trade-related headlines is really so optimistic as to completely roll back haven bids. 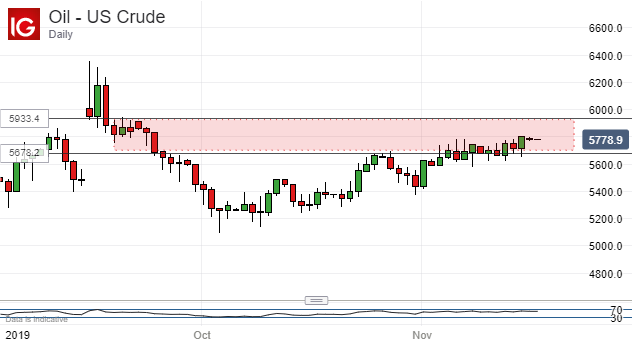 They have inched into a resistance zone whose lower boundary is the closing low of September 24. The market might get quite a psychological boost if it can retake all of that day’s sharp falls, and get up to $58.30/barrel. That region could be a launch pad for another attempt at mid-September’s highs but, in the current rather changeable risk appetite of all markets, that may be too much to ask. It might be better to keep an eye on the current range base instead, with perhaps some downside protection there.

The yellow metal seems unable to make meaningful gains above the recent low of November 12 and, if this trend goes on, it may revisit that point before long.

The bulls’ immediate order of business must be to retake more of the sharp fall seen between November 4 and November 8. They’re not finding this easy at the moment, and if they can’t durably top resistance at November 14’s intraday high of $1473.48/ounce soon then the market’s march lower may go on.