Bitcoin may be headed lower after it slipped beneath the 50-day simple moving average last week, the latest sign that bears are in the driver’s seat. The technical development follows prior breaks of the 20-day and 200-day moving averages, including the formation of a bearish “death cross” in late October. While the death cross was followed by an ironic bullish break higher, bulls have shown an unwillingness to continue and gains have been surrendered. Thus, it seems Bitcoin is positioned to continue its larger downtrend that began in June as the bearish cases build.

With that in mind, BTC could soon look to probe support around $7,100. The level helped to rescue Bitcoin in late October, which later saw the digital asset surge to resistance around $9,545 after briefly trading above $10,500. Now, however, Bitcoin will have to contend with the 200-day and 50-day moving averages which trade overhead. Coupled with secondary barriers in the form of horizontal resistance, Bitcoin’s path higher is facing further obstruction. 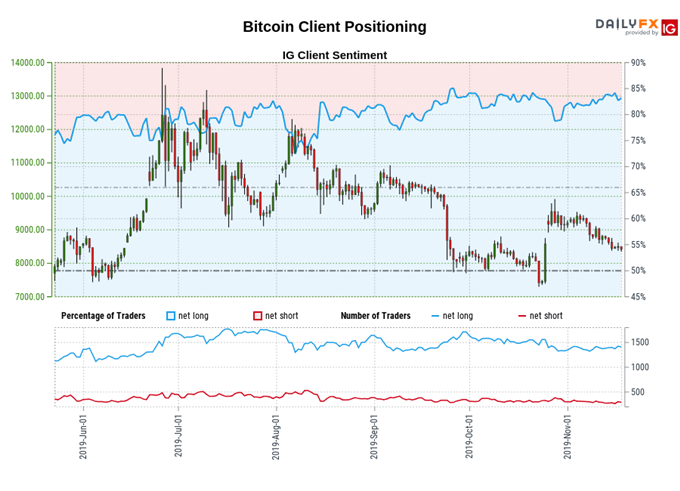 Further still, IG Client Sentiment data also suggests more losses may be in store. Retail trader data shows 83.82% of traders are net-long with the ratio of traders long to short at 5.18 to 1. The number of traders net-long is 3.32% lower than yesterday and 0.44% higher from last week, while the number of traders net-short is 9.28% lower than yesterday and 7.37% lower from last week. We typically take a contrarian view to crowd sentiment, and the fact traders are net-long suggests Bitcoin prices may continue to fall. With that said, the nature of the asset class and the attitude of many Bitcoin-believers tends to skew the data – so take retail positioning with a grain of salt. Either way, the outlook appears bleak and a fundamental shift may be required to right the ship.