GBP could benefit long-term if UK fiscal policy is loosened

The UK General Election campaign has been dominated this week by new public spending pledges by the ruling Conservative Party and the main Opposition Labour Party. If either were to form a government after the December 12 election, and deliver on its promises, that could force the Bank of England to keep monetary policy tighter than would otherwise be the case.

At present, the BoE Base Rate is at 0.75% and market pricing suggests that UK interest rates are more likely to be cut than raised. However, any reductions might be less than currently expected if UK public spending is raised by a new government – and a rate increase can still not be ruled out entirely.

That is potentially long-term positive for GBP/USD and negative for EUR/GBP even though the BoE might be reluctant to tighten monetary policy while UK economic growth is weak and some analysts argue that rates will need to be kept low to prevent an economic downturn if Brexit is delivered. 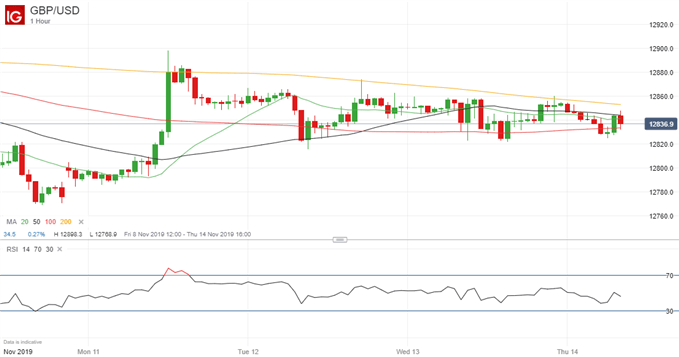 For now, GBP/USD is moving broadly sideways, as the chart above shows. However, a move back to the psychologically important 1.30 level, last touched on October 22, cannot be ruled out entirely. Similarly, traders need to watch out for a possible break downwards to below the 0.85 round number to the 0.8488 low recorded on May 6.