Spot gold prices have experienced a notable amount of selling pressure over the last three months with XAU/USD edging roughly 6% lower from its year-to-date high near $1,560 printed on September 04. Factors that have largely contributed to gold’s recent move to the downside primarily include waning demand for anti-risk assets (like gold) and rising real yields. The aforementioned has resulted broadly in response to improving US-China trade relations, fading recession fears and receding expectations for future FOMC rate cuts.

Yet, these developments appear to have been overwhelmingly reflected in spot gold prices already. At the same time, there is serious potential that the fundamental backdrop may soon revert back to a narrative in favor of higher gold prices. This, combined with encouraging technical signals, could indicate that gold might be on the cusp of a major breakout and resumption of the XAU/USD rally. 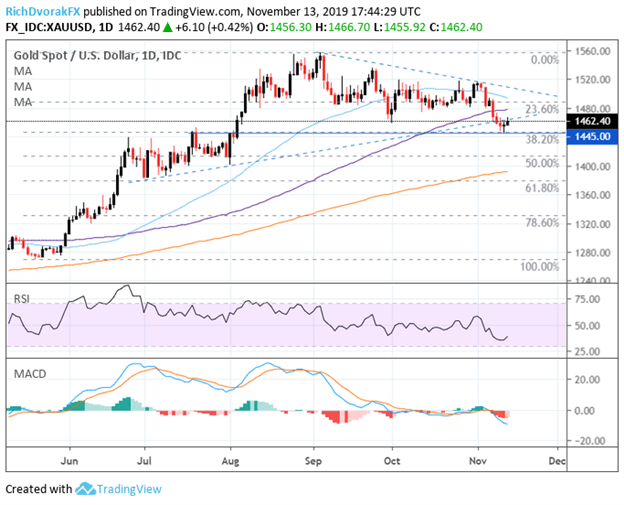 XAU/USD is currently probing the underbelly of the rising trendline breached last Friday that connects the series of higher lows recorded on July 01, July 09 and August 01. While this line of support failed to keep spot gold prices afloat, confluent support provided by the commodity’s 38.2% Fibonacci retracement level of its bullish leg from May 21 to September 04 has so far sent gold rebounding higher.

This zone of technical support is also underpinned by prior resistance identified by the July swing highs near the $1,445 mark. Moreover, the RSI is beginning to show signs of turning higher after approaching “oversold territory” while the MACD indicator speaks to waning bearish momentum. However, XAU/USD still faces technical obstacles which are posed by the 23.6% Fibas well as the 100-day and 50-day simple moving averages roughly around the $1,480 and $1,510 price levels. 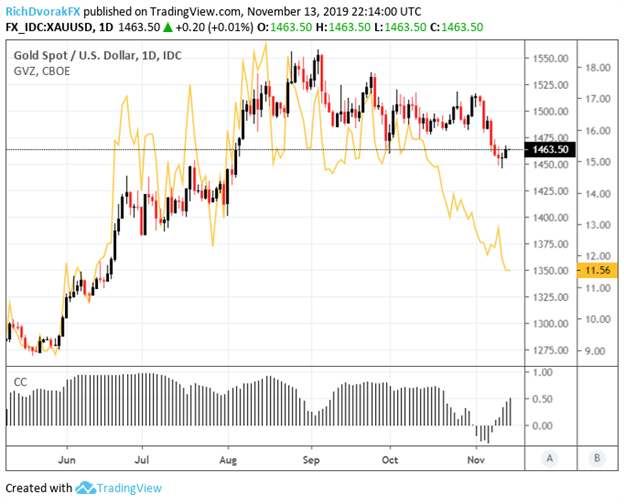 Another headwind that has kept spot gold price action bogged down could be explained by sinking volatility like GVZ (Cboe’s 30-day implied gold volatility index) judging by their generally strong positive correlation. Yet the price of gold stands to enjoy underlying tailwinds from improving technicals and relatively less dovish monetary policy while such depressed volatility smells of broader market complacency.

Alas, XAU/USD is awaiting a meaningful catalyst to spark its next leg higher. A material breakdown in US-China trade talks poses as a likely fundamental driver with potential of sending spot gold prices spiking higher – especially seeing that the two nations are struggling to finalize a so-called phase one trade agreement. Such an event could be identified by an abrupt spike in the VIX and GVZ.

On that note, a recent speech delivered by US President Trump avoided commenting on a potential tariff rollback, which China is pressuring Washington on for a last-minute concession to solidify said phase one trade deal, is a statement in and of itself in my opinion. This development follows harsh remarks from VP Mike Pence three weeks ago that seems to have marked the onset of another rise in tension. So long as the December 15 tariff tranche remains on the table there seems to be a strong possibility that Sino-American relations deteriorate as they have several times before. Reports also just crossed the wires that the US and China hit a snag in talks over agricultural purchases.

Additionally, there is a high likelihood that such a development would be subsequently met by further dovish action by the Fed and global central banks in hopes of offsetting the material downside risk posed by another rise in US-China trade tension and trade war uncertainty. Furthermore, there is the looming risk that the US faces another trade war outbreak across the Atlantic while President Trump ponders whether or not to further instigate a tit-for-tat tariff spat with the European Union.

Trump rifled off some painful comments toward the EU just the other day saying that the bloc’s trade barriers are ‘terrible’ and as bad as China’s. This follows his decision to levy tariffs on $7.5 billion of goods imported from the EU stemming from the WTO Airbus case ruling. If European leaders retaliate against US tariffs taking effect, which has been previously threatened by France’s Le Maire and others, it could prove to be quite destabilizing to both the EU and US in addition to global GDP growth as a whole. In turn, investors would then likely pile into safe havens like gold and sovereign bonds (pushing global yields lower which makes bullion that much more attractive).

Another factor that impacts gold price action is inflation seeing that bullion is widely understood to possess store of value and inflation-hedging traits. The latest US CPI report crossed the wires earlier today which detailed a modest uptick in headline inflation from 1.7% to 1.8%. While gold bulls may currently lack the same conviction seen earlier this year in the absence of forthcoming FOMC rate cuts, XAU/USD still enjoys a strong underlying tailwind from the central bank’s relatively looser policy stance and firming inflation. On the contrary, the price of gold could still experience weakness with potential for a recovery in the global economy and material progress made on the US-China trade war. 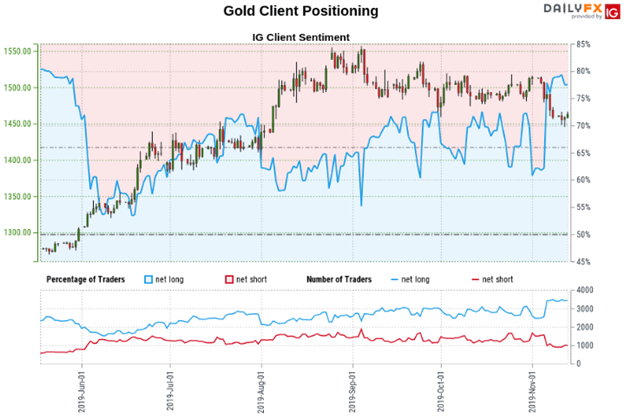