The New Zealand Dollar soared on Wednesday as the Reserve Bank of New Zealand left its key intertest rate on hold, defying a short market which had increasingly expected another rate cut.

The Official Cash Rate remained at its record low of 1%

There had been an unusual level of uncertainty before the fact as to what the RBNZ would do this month, although news of weaker inflation expectations released on Tuesday had for some set the seal on some action.

However, the RBNZ has already reduced borrowing costs on two occasions this year, one of which was August’s surprise, half-percentage-point hack. It may well feel it has time to wait and see what the effects of this stimulus has been before attempting any more.

NZD/USD got a huge boost from the decision with the market reminded, as it was in August, that it’s dealing with a central bank unafraid to spring surprises. 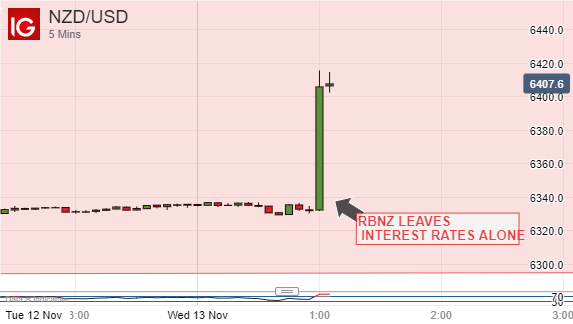 The market will now be keen to see whether action has been shelved pending new data or kept on the table for the near future. RBNZ Governor Adrian Orr is due to speak later, with the central bank’s guidance now crucial for the near-term direction of the kiwi.

For now, the central bank has noted that inflation remains within its target range and that employment is around its maximum sustainable level. It cautioned however that growth is likely to be subdued and that risks to the economy remain tilted to the downside.

The New Zealand Dollar rose through October on its daily chart, having bounced at lows not seen for ten-years against its US cousin at the start of that month. 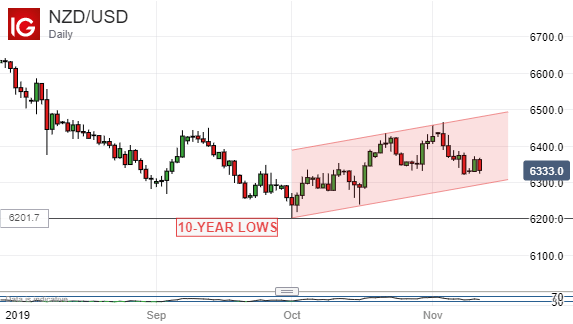 A broad improvement in global risk appetite on hopes that China and the United States were heading closer to at least a trade truce was behind much of that vigor.

November has clearly been a trickier month for the bulls thanks to general US Dollar strength, in the wake of the Federal Reserve’s decision to leave further interest rate cuts dependent on data. The White House has also denied earlier reports that some rollback of tariffs was in the offing.

NZD/USD is now back down to the lows of mid-October, with the base of its overall uptrend channel likely to face a test.