The Japanese Yen may look to recapture lost ground after USD/JPY recently stalled at resistance around 109.5. The Fibonacci level helped to keep a lid on prices upon the previous test, back in early August, and could look to do so again before the nearby descending trendline is required. Further, a break below the 200-day simple moving average around 109 could work to keep USD/JPY contained. 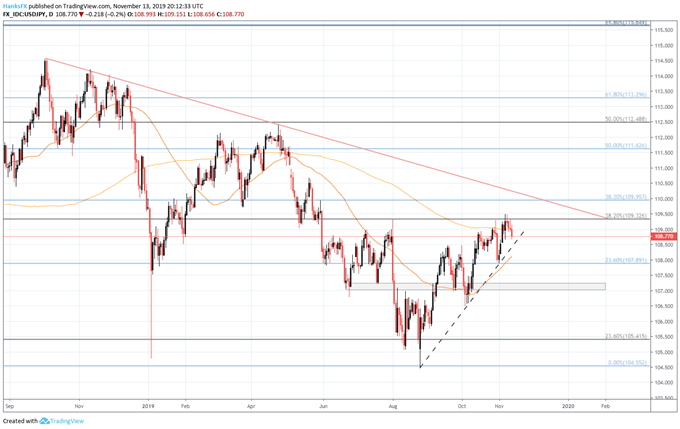 Evidently, USD/JPY will have to surmount a plethora of technical resistance if it is to reverse its longer-term downtrend. Recent gains have been largely fueled by an improvement in risk appetite and the Fed’s decision to pause further monetary easing, but the shift has carried the pair only as far as its 200-day moving average. Thus, USD/JPY may experience undergo another retracement before a subsequent retest. With that in mind, the pair may look to employ support around 108 which has influenced price in the past and is marked by a Fibonacci level.

If broken, subsequent buoyancy may reside around 107.25, an area which has stalled previous attempts lower. Regardless, a material breakdown in US-China trade negotiations could seriously undermine USD/JPY’s standing and threaten to undo recent improvements in the US Dollar’s standing.

After it was announced on Wednesday that the talks have hit a snag on agricultural purchases, the likelihood of a phase one deal has decreased and the outlook for USDJPY has weakened simultaneously. Therefore, resistance to the topside may prove to be insurmountable given the slight shift in the underlying fundamental landscape – a development that could open the door to further Japanese Yen gains.