The U.S. stock market is sitting up in record territory, and with volatility low it is making trading a bit difficult at the moment. The DAX is extended and showing some minor weakness today, but nothing that undermines the trend. Crude oil holds some promise as a trade set-up could be nearing with the development of a channel/bear-flag continuing.

The Dow Jones is sitting up in record territory, just above the January 2018 trend-line that put a ceiling in during July. The extended nature of the market and low volatility accompanying it is making life a little difficult for traders. Giving the trend the benefit of the doubt, allowing for a small congestion pattern to develop may reward traders with a platform from which another leg higher can develop. In the event a congestion phase turns into a knife lower, then shorts may become warranted. But for now it is difficult to be bearish in the absence of any negative price action.

DAX in need of a rest, price action still bullish

The DAX is also sitting up in extended territory, but none of the resistance lines penciled in have been an obstacle for the market’s rise. Price action has not really even so much as hinted that the market wants to roll over, even with today’s little rollover. The area around 13200 is acting as a bit of a floor here and with a few more days a consolidation pattern may lead to higher levels.

Crude oil is wrapped up between a set of parallels that are forming a rising channel/bear-flag formation. The 200-day has been acting as resistance and if price turns down further from here watch the lower parallel. A break of the lower bound of the pattern could kick off a move to the 50-line and worse, the 2016 trend-line we have discussed so much in recent months. Maintaining in the channel, though, will continue to keep the outlook neutral to higher. 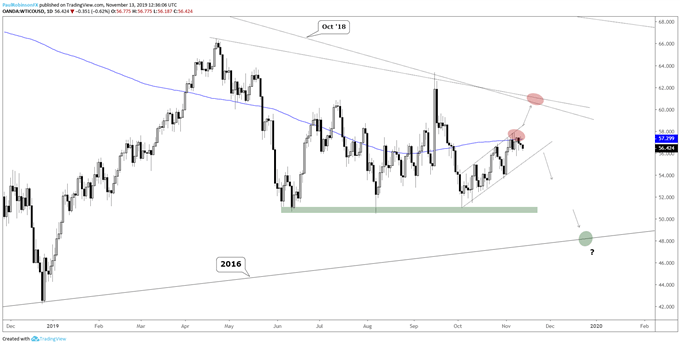