USD: The greenback is on the front-foot as market participants await President Trump’s statement on US trade policy at the Economic Club in New York at 1700GMT. Ahead of the speech, reports from Politico have highlighted that the President is set to delay auto-tariffs on the EU by another 6-months, while Morning Money source reports have also noted that Trump will provide a constructive statement on China.

GBP: UK employment growth continued to show signs of slowing down after the headline figure posted a contraction of 58k. While this may be better than the 94k contraction, the trend will likely provide concerns for the BoE and embolden the views of both Saunders and Haskell who called for a 25bps cut last week. That said, the drop in employment growth had been attributed to the fall in part-time workers, while on a more positive note, the unemployment rate edged lower to 3.8% from 3.9%. Nonetheless, price action in GBP/USD has been relatively calm with the pair continuing to hold a 1.28-1.30 range. 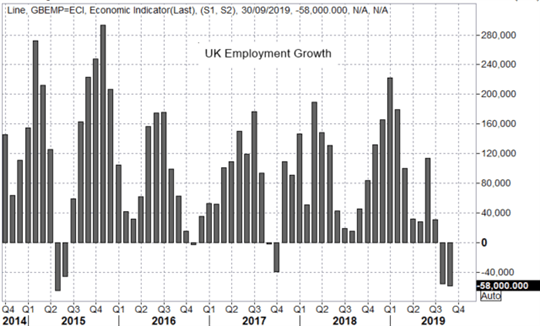 NZD: Ahead of the RBNZ rate decision, the Kiwi is among the underperformers following a drop in 2yr inflation expectations to 1.8% from 1.86%. Consequently, money market pricing of a 25bps rate cut at the monetary policy meeting jumped to 80%. However, eyes will also be placed on the forward guidance, which is likely to be key to the initial reaction of the decision. Of note, NZD volatility has surged to its highest since May 2019. 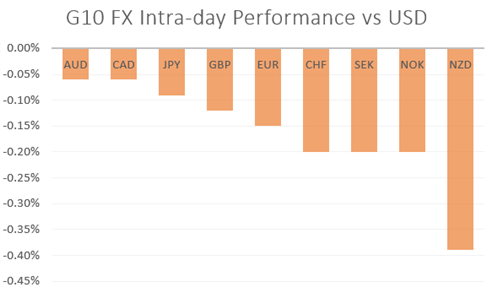