The New Zealand Dollar fell on Tuesday following news that domestic inflation expectations had receded further, perhaps making it more likely that the Reserve Bank of New Zealand will cut rates this week.

Expectations of consumer price inflation two years out fell to 1.80% for the fourth quarter, according to official data. This was below the 1.85% forecast in the previous quarter, Expectations one year out were for a rate of 1.66%, not much above the last reported official inflation rate of 1.50%. Inflation has decelerated this year from the 1.9% levels seen in January.

Forecasts are in fact well within the RBNZ’s 1-3% target band but have clearly weakened.

The RNBZ will give its November monetary policy decision on Wednesday. The markets have had to contend with a variety of views as to what will happen to the record low 1% Official Cash Rate. Westpac for example initially suggested that there could be a cut, but now thinks there’ll be no change.

This release was seen rightly or wrongly as a major clue as to RBNZ action, and the outcome seems to have underlined expectations that rates could head lower again. 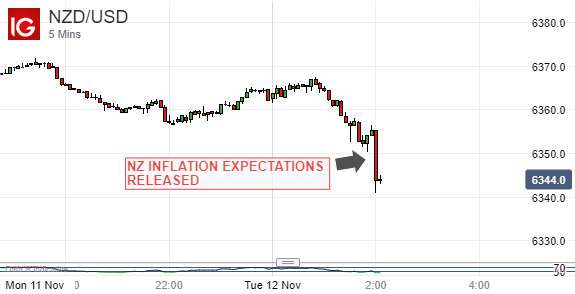 The New Zealand Dollar bounced at eleven year lows on its daily chart at the end of October as risk appetite picked up in expectations of a trade truce, at least, between China and the United States. However, its rise stalled in November. Trade progress has been slow, while the US Dollar has made broad gains in light of the Federal Reserve’s disinclination to underwrite a series of interest rate reductions but to, rather, remain data-dependent for its policy path. 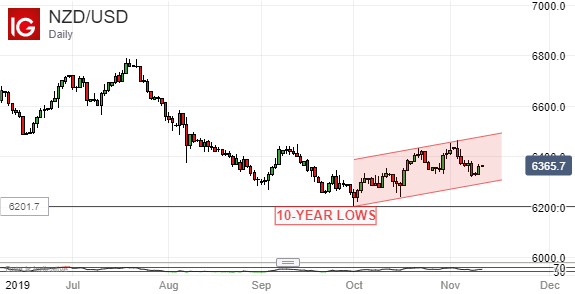 Analysts at the Bank of New Zealand said this week that the currency might be vulnerable to a correction higher. Its model puts fair value for NZD/USD at 0.69 and, the bank’s analysts wrote, that means it’s as far away from this as it has been for more than ten years.

Opinion remains unusually divided on the chance of a further interest rate reduction this week. However, given the overwhelming shortness of this market, there could be some chance that the New Zealand Dollar ends up with eventual gains whatever the RBNZ does, simply because that event risk is out of the way.