The UK economy grew by 0.3% in Q3, but the year-on-year figure fell to 1.0% from 1.3%, its lowest level since Q1 2010. According to the ONS, the service and construction sectors provided positive contributions to GDP growth. Monthly GDP contracted by 0.1% in September as expected.

Sterling was little changed on the release and remains above 1.2800 against the US dollar for now. Sterling remains in thrall of UK politics with the two major parties announcing their spending plans over the weekend. The latest CoT shows Sterling short positions reduced further for the eight-consecutive week. 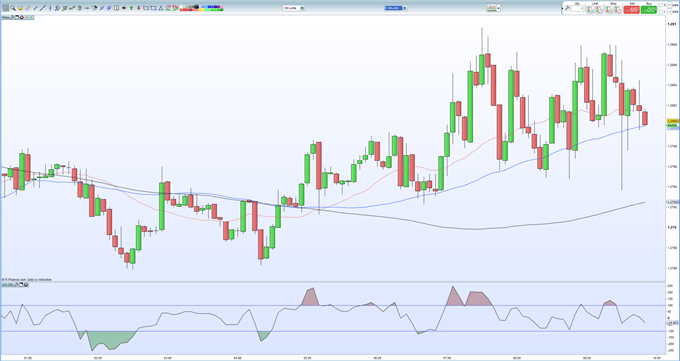 Ratings agency Moody’s downgraded the UK’s credit outlook to negative from stable on Friday, citing Brexit policy-making paralysis and the potential ramping up of spending in the UK with ‘no clear plan’ of how to finance it. Moody’s is concerned that in the current political climate that there are no attempts to reduce UK debt levels, with both major UK parties promising a huge spending program if elected/re-elected in December. UK government bond yields – gilts – barely moved on Monday as traders looked ahead to the UK growth figures.

On Wednesday there is the latest look at UK inflation data, while on Thursday, October retail sales is announced.