USD/JPY gyrated around the University of Michigan’s preliminary release of its Survey of Consumers report for November, which showed a slight increase in consumer sentiment. The headline figure printed a reading of 95.7 which topped expectations of 95.5 and rose slightly from last month’s reading. USD/JPY is on its back foot primarily due to a broad anti-risk mood so far during Friday’s trading session as US-China trade war uncertainty resurfaces.

The Consumer Sentiment report was overshadowed by remarks from President Trump who stated that there is no official agreement or plan to rollback tariffs as part of the phase-one trade agreement. The latest commentary out of the US-China trade war front follows several conflicting reports this week regarding the partial trade deal and tariff rollback. Gold moved up modestly as Trump’s tariff headlines crossed the wires. 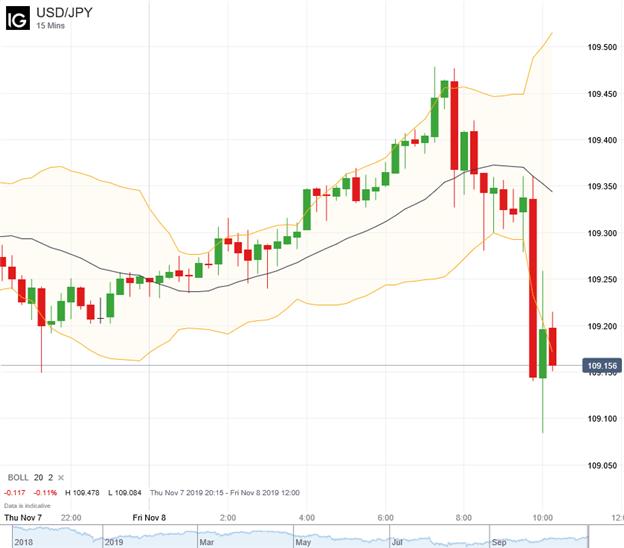 Nevertheless, current conditions component on the UMich Consumer Sentiment report printed 110.9. This was a modest decrease from the previous month’s reading of 113.2 with consumers remaining rather upbeat about the current situation in the economy bolstered by a robust outlook on the labor market. That was also reflected in consumer outlook on the economy highlighted by the future expectations component in the report printing 85.9, up from the previous month reading of 84.2. The yield curve, a popular indicator to predict forthcoming recessions, continues to steepen from it’s inversion back in August with the 2s10s curve rising to a spread of 25.930. 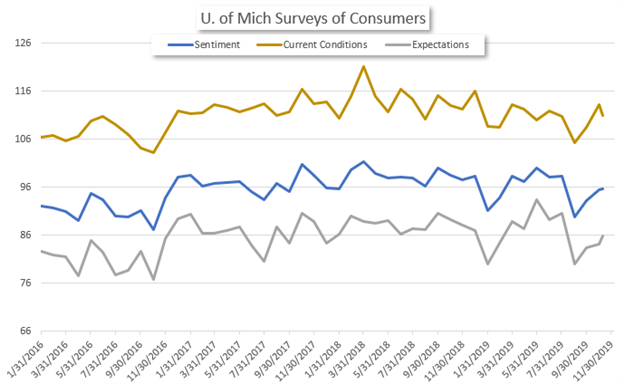 Inflation expectations also moved slighly higher as consumers expect prices to increase, with the 5-10 year inflation outlook in the report moving up to 2.4%. Inflation has consitently undershoot Fed expecation target of 2.0%, however the Michigan survey has previously overstated inflation relative to data read by the Federal Reserve. Nevertheless, firming inflation expectations could be driven by three-consecutive FOMC rate cuts so far this year. 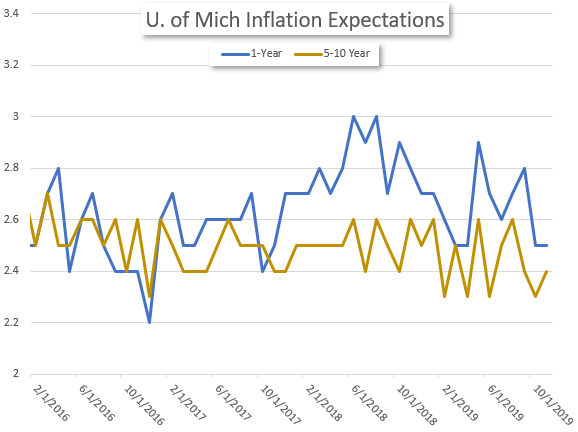 Nevertheless, while the preliminary November consumer sentiment report provided traders with a sign of encouragement, risk appetite going forward continues to rely on trade war headlines and whether the US and China can make substantial headway toward finalizing the highly-anticipated phase-one trade agreement, which still sounds uncertain after Trump’s comments this morning.