Headlines crossing the wires on US-China trade talks are propelling risk appetite further after a Trump administration official stated the US will agreed to roll back tariffs in a last minute concession to seal a phase-one trade agreement. Gold cratered below the 1480.00 mark while US Treasury Yields surged in the latest blow to safe-havens driven by the optimistic trade war headlines. 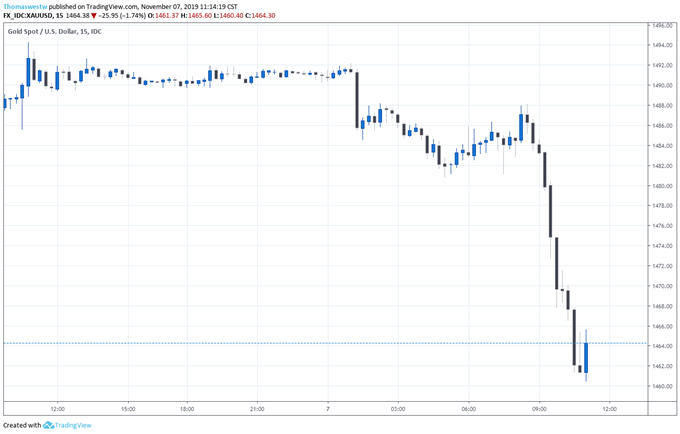 A spokesman for the Chinese Ministry of Commerce Gao Feng said Thursday that negotiators have been working constructively these past weeks to rollback tariffs as progress is made towards the signing of a ‘phase-one’ portion of the trade deal, which was tentatively reached last month. The Ministry of Commerce spokesman said that this is an important part of reaching the deal being signed. However, a place and time for the signing of the trade agreement is not yet decided according to the same US official who confirmed the rollback of tariffs. 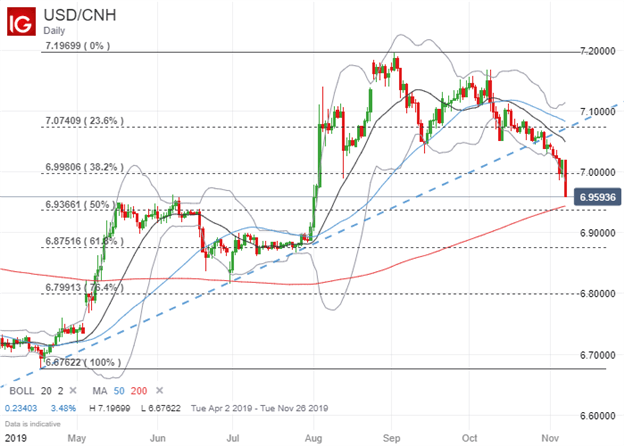 Traders extended the overall risk-on move across markets witnessed broadly over the last few weeks, which was already being bolstered by positive trade headlines since President Trump and Chinese Vice Premier Liu He announced the phase one trade agreement last month. US Treasury yields skyrocketed as demand for anti-risk assets quickly dissipated. The US10YR yield lept above 1.950% and on pace for its biggest jump since US President Trump was elected back in November 2016. Also reacting to the headline was USD/CNH which dropped as the Chinese Yuan strengthened against the greenback to trade near the 6.9500 mark, the Yuan’s strongest level since August.