After declining for months following its recent peak in June, Bitcoin bulls staged an abrupt rally in late October – thrusting the cryptocurrency back above its 200-day simple moving average. Since then, a death cross has formed and BTCUSD has been unable to continue higher. Seemingly trapped beneath the 38.2% Fibonacci level around $9545, BTC needs every bullish catalyst it can muster to stave off further declines. Unfortunately for Bitcoin bulls, recent US-China trade war developments could have undercut a tailwind the coin has historically benefited from. 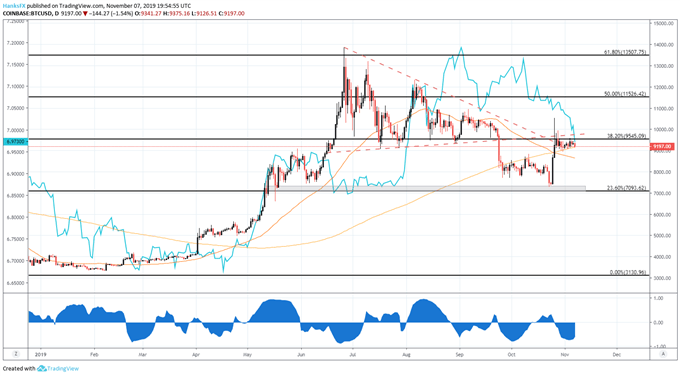 Chart created with TradingView. USD/CNH overlaid in teal with BTC/USD to USD/CNH correlation in blue

Following a report that a phase one trade deal between the United States and China would be accompanied by a rollback in tariffs, USD/CNH fell precipitously as risk assets like the S&P 500 and Dow Jones drove to new heights. While seemingly unrelated, the trade war developments may have had an adverse impact on Bitcoin and the rest of the cryptocurrency market – an event that could look to erode Bitcoin’s recent rally.

Looking to the chart above, USD/CNH and BTC/USD have enjoyed a statistically significant positive correlation in the past, dictating that when USD/CNH rises, Bitcoin should benefit. Thus, the opposite holds true – when the Yuan gains, Bitcoin is undermined. While this relationship has held true in the past, it has deteriorated substantially in recent weeks and now rests in negative territory with the 20-day correlation sitting at -0.58. Still, performances in other emerging market currencies suggest the initial thesis remains true: what is bad for EM FX is bullish for Bitcoin.

Consequently, if Bitcoin bulls aim to keep the coin above the 200-day moving average in its vulnerable state – a strengthening Yuan is an unwelcome development regardless of the recent correlation between the two currencies. With that in mind, it will be important to keep an eye on movements in emerging market currencies as US-China trade war stories continue to develop. In the meantime, follow @PeterHanksFX on Twitter for further updates and analysis.