Global equities have continued to push higher in recent weeks with US stocks hitting fresh record highs, while yesterday saw European indices such as the DAX rising to its best level since the beginning of 2018. The main narrative that has been fed to market participants has centered around the reduction in trade uncertainty with the US and China looking to sign off the phase 1 agreement in mid-November. Reports this morning via the FT also noted that the White House may consider rolling back levies on $112bln of Chinese imports as a concession to seal a partial deal. As such, while this has been a factor in boosting global sentiment and thus lifting equity markets, another key contribution to the upside in equity markets has been fresh liquidity stemming from central banks growing their balance sheets, most notably the Fed and the ECB.

As a result, signs of market complacency have been growing with the volatility index (VIX) continuing to head lower, while CFTC positioning data shows that speculators hold a record short in the VIX. Alongside this, the CNN Fear Greed Index is pointing to extreme greed. 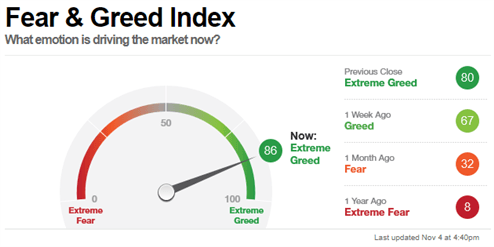 In mid-October the Fed announced that it would expand the balance by buying $60bln a month in Treasury bills, in order to boost reserves held by banks. The NY Fed had later offered to provide more relief to repo markets by offering temporary daily operations of $75bln/day before raising this to $120bln/day. In September, the ECB announced that they would restart QE in November with €20bln/month of asset purchases. 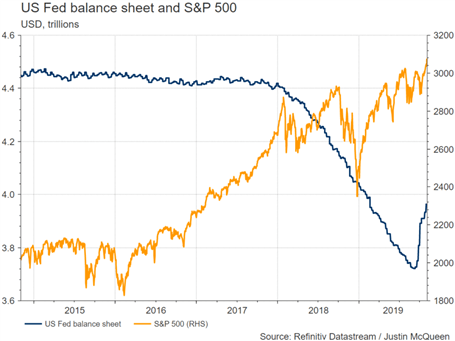 Over the past month equity markets have benefitted from subdued volatility with the VIX falling over 26% from the October high of 20 to 14.65. In turn, the S&P 500 has gained over 6% reaching an all-time high of 3085. However, with speculators holding a record short in the VIX, questions will be raised as to whether the market is beginning to show signs of complacency, potentially leaving equity markets vulnerable to a VIX blowout.

Positioning is at extremes on both outright net shorts (188k) and on an open interest adjusted basis (41.5%). Although, with that said, risks of a VIX blowout, like that seen in February 2018 may be somewhat misplaced, given that open interest is comparatively lower at 453k from 650k back in early 2018. As it stands, risk sentiment looks set to remain buoyed in the short term as global uncertainty eases.

Record Short Positioning in the VIX 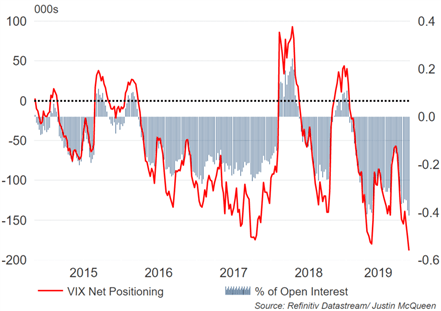