US Dollar May Fall vs ASEAN FX on Singapore, China, India PMIs

The US Dollar has lost some ground against ASEAN currencies as the MSCI Emerging Markets Index rose 12.75 percent from the August low. Its decline against the Singapore Dollar, Philippine Peso, Malaysian Ringgit, Indonesian Rupiah and Indian Rupee has occurred amid rising hopes of a US-China trade deal. Three interest rate cuts from the Fed have also delivered an easing in global easing credit conditions.

The importance of a resolution between the world’s largest economies is key for the Asia Pacific region. Hopes of a deal may continue denting the Dollar. Otherwise, risk of capital flight could turn things around. This is as economic data has been deteriorating alongside a slowdown in global growth. Last month, the International Monetary Fund downgraded its outlook on the world economy, citing trade wars as a key risk.

Read this week’s ASEAN fundamental outlook to see what is in store for these currencies ahead!

The latter is a particular risk given the slew of data delivered on Tuesday. Markit Singapore PMI – whole economy - clocked in at 47.4 in October from 48.3 in August. A reading under 50 indicates a contraction in output. That was the worst outcome since August 2012 and a third consecutive month of declines. Disinflation has also been hitting the Philippines, with CPI just clocking in at 0.8% y/y in October.

While that was as expected, it was still the slowest pace of price growth since April 2016 and may continue fueling BSP rate cut bets. Shortly afterwards, Caixin services PMI data printed at 51.1, as expected. This was down from 51.3 in August and failed to achieve a noticeably better outcome in similar private sector manufacturing readings last week.

After the government downgraded 2019 growth estimates to 5.1% from 5.3% prior, Indonesia GDP clocked in at 5.02 percent y/y in the third quarter. This was slightly higher than the 5.00% estimate, but still the weakest since Q2 2017. Meanwhile, Markit Indian composite PMI printed 49.6 in October versus 49.8. The synchronized slowdown in PMI from China, India and Singapore are highlighted below. 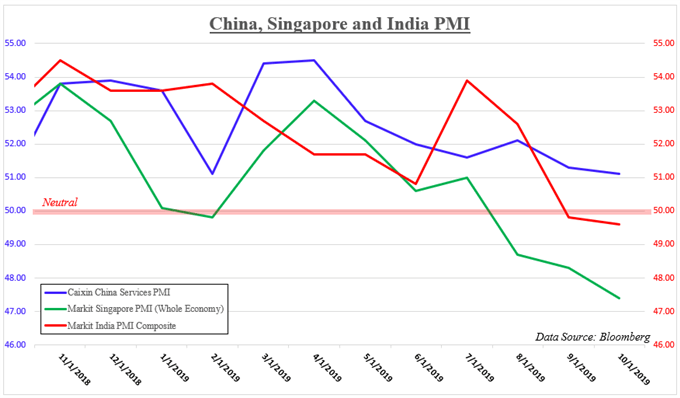 Using an average against the SGD, MYR, IDR and PHP, the US Dollar is in aggregate sitting at its weakest against these currencies since late July. The Dollar recently broke under rising support from March, opening the door to testing lows from June. Near-term resistance is at 4.0204 which is the 61.8 percent Fibonacci retracement. A daily close above this level could put USD strength back on the table.

To read more about where ASEAN currencies could go, check out my latest coverage of USD/PHP + USD/MYR, and USD/SGD + USD/IDR technical analysis 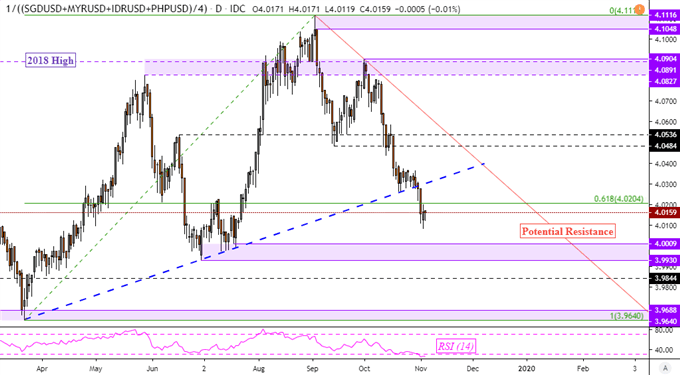