Risk appetite was firm, on some more optimism over US-China trade, as reports crossed the wires that the Washington would consider removing some tariffs. Investors were clearly tempted back into riskier, growth correlated assets with havens like the gold and the Japanese Yen unloved.

Still, the haven market will look like all others to the day’s economic numbers. These will include the US non-manufacturing indicator from the Institute for Supply management which will be even more closely eyed than usual following Monday’s news that the manufacturing variant showed a third straight month of contraction.

Oil prices didn’t share in the general risk asset cheer. They pared losses through the session, but investors are reportedly concerned that the Organization of Petroleum Exporting Countries may not be able to agree on extending and possibly deepening production cuts.

Of more immediate concern will be US inventory data from the Department of Energy due for release Tuesday. A surprise drawdown roiled markets two weeks ago but there has been stabilization since.

The latest attempt at the topside of the current trading band seems to have been rejected.

Assuming the bulls don’t rediscover enough fight to try again in the near term, then support from last week, in the $1503 area, will likely come into play quite soon. If that holds, expect to see another try at the range top. However, if support gives way, the $1490 area around which trade coalesced for much of mid-October will offer strong defense before bears can force a trial of the range base.

US crude oil prices remain a clear bias higher with their dominant short-term uptrend channel under no obvious threat at current prices. 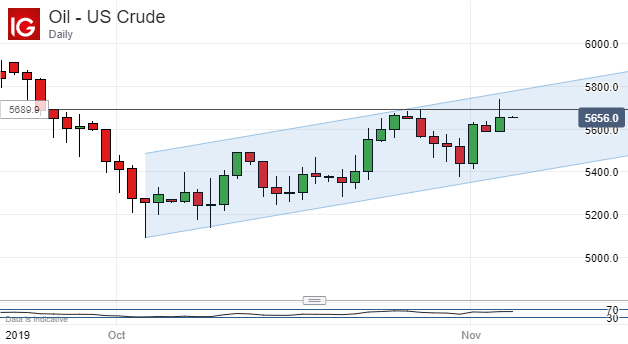 That said the most recent upward foray has not yet conclusively taken the market above its previous significant peak and, if it can’t soon, there may be a little exhaustion that will need to play out before prices can move higher.