Crude oil prices may find themselves agonizing over OPEC’s World Outlook if analysts forecast softer future demand. Year-to-date, Brent is up a little over 13 percent, but that is significantly lower than the over-35 percent rise it had from January through April of this year. Over that same time frame, the fundamental outlook has significantly deteriorated and led to what some analysts are calling an “industrial recession”. 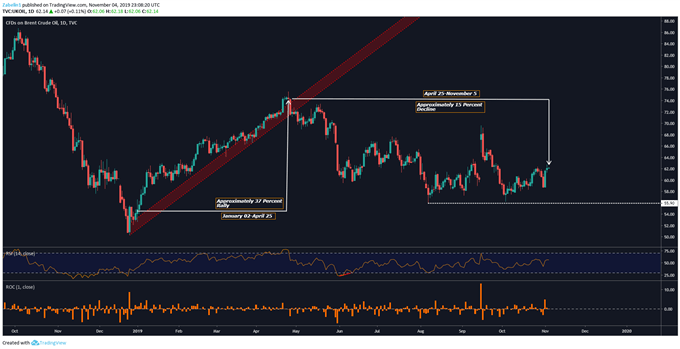 The US-China trade war is undoubtedly a significant factor behind the world’s “synchronized slowdown” which has led to reduced cross-border investment and job creation. Consequently, businesses have been more reluctant to expand their enterprises which has in turn reduced the demand for key inputs – like crude oil. But there is another side to the story: oversupply.

OPEC+ members have cut their output in an effort to combat the downside force of oversupply on crude oil prices. However, inter-organization dissonance is making it more difficult for the cartel to uniformly and effectively curb production. Nigeria, Russia and Iraq have all over pumped their quotas for October, leaving Saudi Arabia – the biggest oil producer in the group – to take up the mantle and pump below its target.

The petroleum giant is also contending with regional geopolitical risks. The Houthi attack on the Aramco oil processing facility disrupted half of the country’s oil-producing capacity and caused global prices to skyrocket. Renewed risks between Iran and the US may also spill over into Saudi Arabia which could lead to greater political strife and uncertainty while Saudi Aramco is getting ready to IPO on the Riyadh stock exchange.

In an effort to boost prices, OPEC is expected to agree to deeper cuts at its meeting in December according to Iranian Oil Minister Bijan Zanganeh. However, up until then, amid the renewed optimism about US-China trade talks, the buoyancy may help boost oil prices and other sentiment-linked assets. It remains to be seen though, whether this improvement in sentiment is merely ethereal optimism or hope grounded in reality.