The price of Sterling continues to trade below 1.30, with Brexit debates in the UK Parliament on hold until after the General Election on December 12. To break through, it will need a boost from pre-election opinion polls suggesting that the new Parliament will be against a no-deal Brexit.

For GBP/USD traders, the key question is whether the hard-line Brexit Party will take enough votes from the Conservatives of Prime Minister Boris Johnson to let a more Remain-oriented Government to take power. 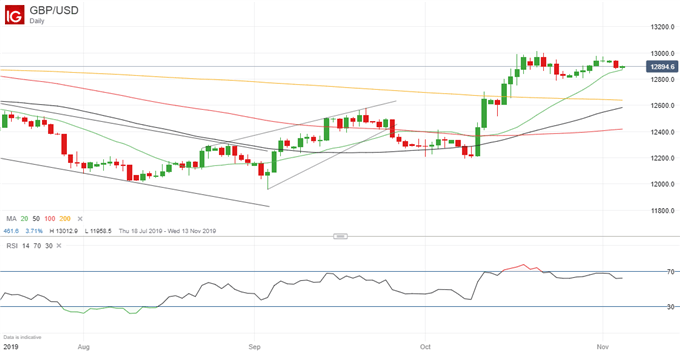 Monday’s key news event was the election of Sir Lindsay Hoyle as the new Speaker of the UK House of Commons, who will steer future Brexit debates once new Members of Parliament are elected. One concern for traders is that the Brexit Party of Nigel Farage will take enough votes from UK Prime Minister Boris Johnson’s Conservatives to make a no-deal Brexit more likely – a development that would likely send the GBP/USD price lower.

By contrast, opinion polls suggesting advances by the anti-Brexit Liberal Democrats and the Scottish National Party would likely give Sterling the strength to advance above 1.30. The LibDems launch their election manifesto today, Tuesday, amid a row over their leader Jo Swinson being excluded from a proposed television debate hosted by the broadcaster ITV. It is planning a head-to-head between Johnson and the leader of the largest Opposition party, Labour’s Jeremy Corbyn.