A reduction in trade war uncertainty has benefitted equity markets this morning after US Commerce Secretary Wilbur Ross stated that he was optimistic on US-China trade talks, while also noting that licenses would be granted for American companies to sell to Huawei. Alongside this, risk appetite and in particular the DAX had been supported by comments from the Commerce Secretary that auto-tariffs may not be needed, which in turn saw the DAX break above 13,000. Of note, the auto-tariff deadline is due on November 14th.

EUR: A relatively subdued start to the week for the Euro as market participants awaits Christine Lagarde’s first speech as ECB President. Investors will look to gauge the President’s stance on monetary policy, while comments pertaining to fiscal stimulus will be particularly scrutinised amid the ECB’s recent rhetoric. Final Manufacturing PMI’s saw a slight uptick, however, given that this is from a very low base, reaction in the Euro had been muted. That said, option markets appear to be showing signs of a growing bullish bias in the Euro with risk reversals across the curve showing demand for topside protection.

ZAR: A much needed relief rally in the South African Rand after Moody’s maintained their investment grade rating at Baa3, albeit lowering their outlook to negative from stable. Nonetheless, the fact that South Africa have avoided dropping into junk status for now at least, has been enough for the ZAR to recover. However, the threat of a downgrade remains with Moody’s highlighting that the 2020 budget will be key in determining Moody’s position on South Africa’s sovereign rating. 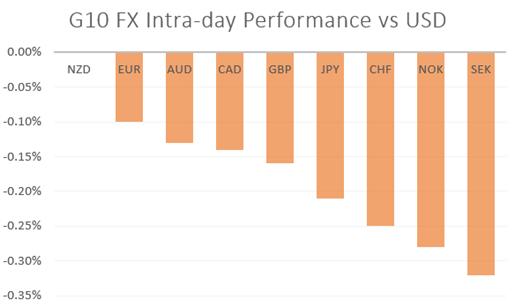