Crude oil prices slipped back a little in Asia on Monday, possibly with investors taking some cash off the table ahead of important US and European data.

Prices gained as the preceding week bowed out, boosted by a much stronger-than-expected US jobs report on Friday. There was also a degree of optimism that US-China trade talks may yet end in a near-term agreement.

However, with European manufacturing Purchasing Managers Index numbers coming up on Monday, along with other key indicators such as US durable goods and factory orders, investors may have cashed out some of their recent gains.

Gold prices drifted lower with risk appetite broadly more supportive of risker assets. Major Asia-Pacific stock markets were higher across the board on those same trade hopes, although the session lacked its common bellwether Japan. Tokyo markets were closed for holiday.

Near-term market focus here may rest on incoming European Central Bank President Christine Lagarde. She will give her first speech in the role later Monday, with markets expecting the dovish tone of her predecessor Mario Draghi to endure. 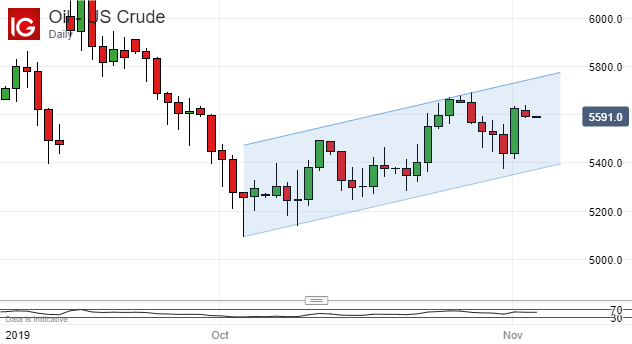 Prices remain well within the broad uptrend channel which has bounced trade since oil lifted off the plateau it hugged in October’s first third. That said the latest upward move seems to be running out of road well short of its previous significant high. That was October 28’s $56.58/barrel.

Failure to regain momentum toward that point will likely see gradual progression toward the channel base, but support from October 31’s closing low at $54.39 might hold the bears before they can get there.

Prices remain close to the top of a quite narrow trading band which has effectively held sway on the daily charts since September. Recent sessions have seen quite a number of the narrow trading ranges which could speak to a degree of indecision. However, even if prices do manage to break to the topside, it’s worth remembering that time out of this band has been extremely short lived.