In a similar fashion to Wednesday’s price action in response to the October Fed meeting, the US Dollar just whipsawed lower once more following the latest US NFP report and ISM Manufacturing PMI data. A robust print on nonfarm payrolls initially sent the US Dollar surging as resilience seen across America’s labor market squashes recession fears, but US Dollar upside was quickly erased after the ISM Manufacturing PMI figure came in below consensus and sent the greenback pivoting from session highs to session lows. 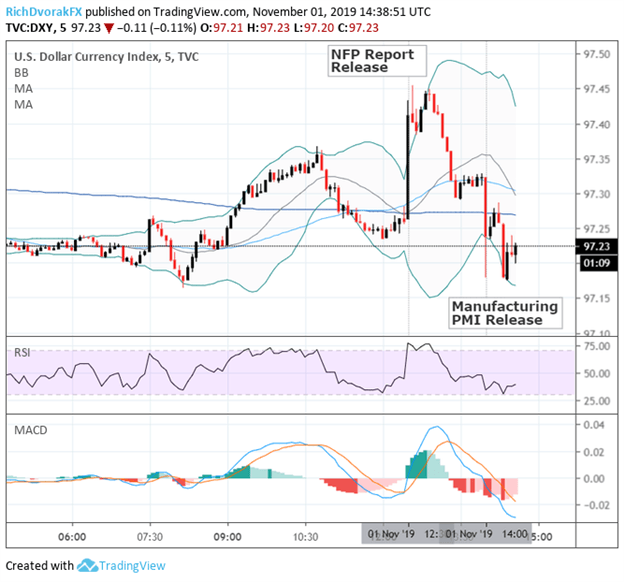 The US Dollar – measured by the DXY Index – initially spiked in response to an overall healthy nonfarm payrolls report released earlier during Friday’s trading session, but the greenback quickly reversed back toward intraday lows after the ISM Manufacturing PMI data crossed the wires.

Volatility in the US Dollar surrounding the latest high-impact economic data was particularly noticeable in spot USD/JPY price action, though the move was felt across the board. I noted in Thursday’s publication of the daily US Dollar Price Volatility Report that USD/JPY could be particularly volatile in response to this morning’s NFP and ISM Manufacturing PMI Reports. 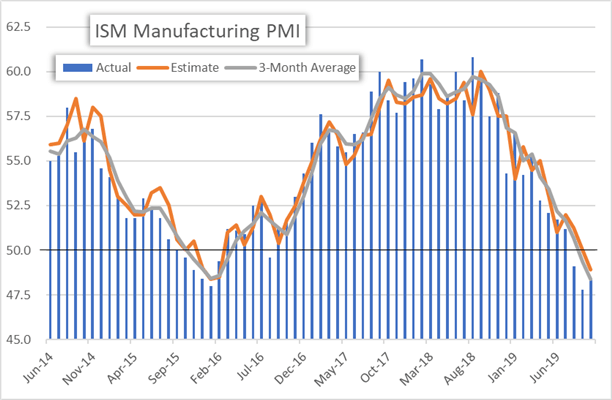 The headline ISM Manufacturing PMI for October came in at 48.3 and compares to the market’s estimate of 48.9 and prior reading of 47.8. While the ISM Manufacturing PMI improved slightly from last month’s report, reading fell short of market expectations and likely triggered the negative reaction in the US Dollar due to changes in FOMC rate cut expectations. The manufacturing sector has remained in contraction territory (a reading below 50.0) for its third consecutive month. 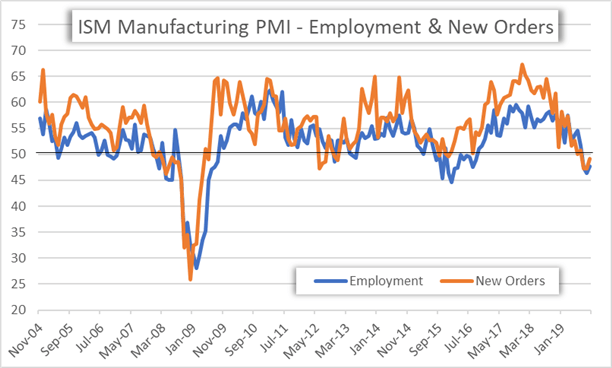 However, two closely watched components out of the ISM Manufacturing PMI report – the employment index and new orders index – both showed a modest uptick in October to 47.7 and 49.1 respectively from September’s readings of 46.3 and 47.3. Yet the trend continues to move broadly lower nonetheless.

The lower-than-expected reading on the ISM Manufacturing PMI report this morning echoed last night’s miss on the China Manufacturing PMI report. The still ongoing US-China trade war and impact from tariffs remain at the center of business uncertainty weighing on economic activity indicated in both manufacturing and services PMI data across the world. The trade war is widely blamed as the principal driver of slowing global GDP growth and remains a lurking headwind that markets must weather.

Some respondents quoted in the October ISM Manufacturing Report noted that “customer demand is down, and we are expecting a very soft fourth quarter, without much relief in sight for Q1” and how the “economy is showing slight signs of weakening [while] the same business headwinds on trade, tariffs, and currency uncertainty are making the environment challenging.” That being said, the manufacturing sector comprises roughly ~15% of the US economy and greater credence will likely be paid to next week's release of the October ISM Services/Non-Manufacturing PMI Report.