Gold prices look set for a second week of gains even as spot prices inched a little lower on Friday.

The broad backdrop looks set to remain quite supportive for gold with interest rates across the major economies either headed lower or set to hold at low levels. However, investors will still need to watch US-China trade headlines and the United Kingdom’s Brexit election. Both will retain their ability to flip the risk switch one way or another with maddeningly little warning and could send gold prices lower in the short term despite quite benign conditions for the asset.

Investors are of course still focused on the US-China trade story. However, gold edged lower in Asia Friday as local stock markets showed some resilience. Reports on Thursday that China doubts that a long-term deal is possible with the United States still cast a cloud over risk appetite, supporting assets like gold. However, the day’s economic news wasn’t all bad. A private survey showed that China’s manufacturing sector expanded last month, in contrast to the official data.

Crude oil prices as so often behaved inversely to gold’s. They inched up through the session but look set for another week of hefty falls as trade gloom meets signs of quite rapidly increasing supply in this market. News that Japan’s factory activity hit a three-year low probably didn’t help matters.

A survey from Reuters indicated that prices are likely to remain biased lower this year and into next. US crude production soared to nearly 600,000 barrels per day in August thanks to a 30% rise in output from the Gulf of Mexico. The Organization of Petroleum Exporting Countries is also producing at a more respectable clip. Output has recovered in October from September’s eight-year lows with Saudi production coming quickly back on stream after attacks on its oil plants.

This market may have to wait until OPEC meets in December to see if meaningful production cuts can be agreed.

Spot prices have bounced once again at a narrow support band which has been important to this market since the start of October.

They are also sitting very happily above their old downtrend line and challenging the previous significant high That comes in at 1514.56 Watch to see if the bulls can force the pace above this line next week. It could be quite a bullish near-term signal if they can

On its daily chart US crude has clearly seen a failure to break above its dominant uptrend channel this week. 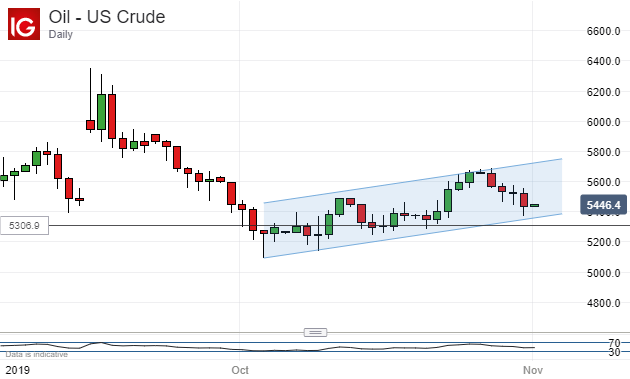 Market focus will now be on the channel base which is getting rather close to current prices. It comes in around $53.49. Should this give way then support from earlier in October around the $53.00 region will probably been in play but this may not prevent deeper falls if it’s tested.