Gold prices were steady on Wednesday in Asia, holding up thanks to news that a potential US-China trade pact could be delayed, even as investors looked ahead to the Federal Reserve’s next monetary policy decision.

That will come in the early hours of Thursday local time and is expected to produce a cut in borrowing costs. Indeed, that is so well-baked into expectations that it is hardly likely to affect markets. What will though is the Fed’s sense of the future, and how many more times it might cut. The market is rather sure that more reductions will come and, while the Fed’s reinforcement of that belief might hit gold, it may prove tough for the central bank to be more dovish than the market.

Overall risk appetite was hit somewhat, to the benefit of gold, by news that a proposed trade accord between Washington and Beijing will probably not now be signed as hoped in Chile next month, but the US Administration said that did not mean that the chance of a deal was falling apart.

Brexit was also in play, as usual, with Parliament agreeing to an election on December 12. This may effectively be at least in some form a second referendum on the vexed issue of leaving the European Union.

Crude oil prices retreated somewhat, with that possible trade delay weighing on them too. Indeed, that factor was strong enough to offset the effect of another surprising fall in US stockpiles. The American Petroleum Institute said on Tuesday that inventories fell by 708,000 barrels last week, once again thwarting expectations of a build. The market had expected stocks to have risen by nearly half a million barrels.

There’s more, similar information coming up later in the session in the form of the Department of Energy’s own storage records.

Spot prices have retreated once more below the downtrend channel out of which they only managed a brief escape last week. Two days of falls have seen this back in focus.

The past few weeks’ trade has seen some narrow ranges which leave near-term support quite close at hand. Bulls will try to keep the market above a narrow band of support defined at the top by October 13’s closing low of $1483.5 and at the base by $1472.5. That was September 30’s closing low and, perhaps the closest notable low point on the chart.

Fundamentally, it seems unlikely that gold will see a serious sharp slide for as long as risk appetite remains fickle and dependent on trade and Brexit headlines.

Prices show clear signs of topping out, having made a new higher high this week above the previous peak of $54.90 made on October 11. 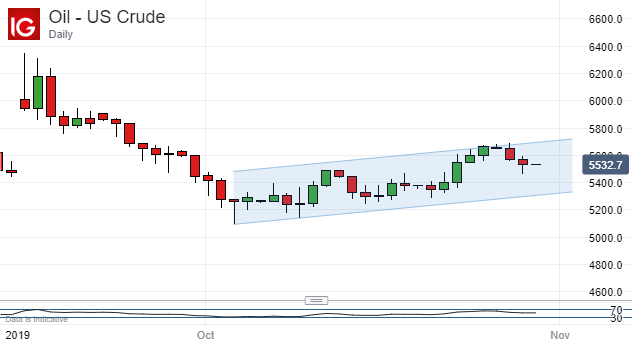 However, the bulls haven’t given up yet despite a couple of days of falls. Prices remain above that point still, if not by much and the prevalent uptrend channel from early October’s lows is still intact.