Crude Oil prices slipped back a little in Asian hours Tuesday with market eyes on US inventory data.

A surprise drawdown reported last week kept the market supported, as have more upbeat comments on the possibility of a trade deal between China and the US. The American Petroleum Institute will release its stockpile numbers later in the global day and the Energy Information Administration follows it, on Wednesday.

Wire reports suggest that the industry is looking for an inventory build this week, with oil prices continuing to diverge from stock markets. The S&P 500 reached a new record high on Monday as investors looked with hope to more stimulus from the Federal Reserve. The oil market remains concerned about likely end demand ahead and may well continue to do so in the absence of anything less than a full, wide ranging trade deal.

Wall Street’s vigor robbed the gold market of some of its own, with spot prices hovering around the psychologically important $1,490/ounce level.

The market continues to derive a lot of support from the prognosis that US interest rates are headed lower, something which would improve the appeal of non-yielding gold. However soaring equity markets have severely dampened short-term demand for perceived haven assets. 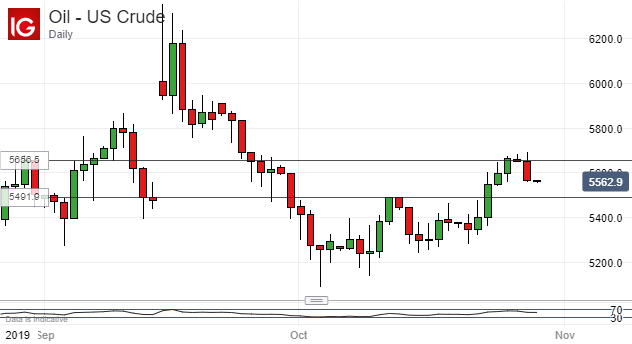 A break below that lower bound would put the entire rise up from early October’s lows in the $51 area back in play, but a trial of it seems unlikely unless inventory data rise sharply or, perhaps, if the US central bank sounds a more hawkish note on monetary policy than the markets expect.

Gold prices have seen a couple of narrow daily ranges in the past week, leading up to the sharper falls seen Tuesday as trade optimism rose around the world.

That fall has reversed the tentative foray above a downtrend which had previously ruled since September 25 and which was itself only an extension of the retreat from the highs of September 4.

A daily close back below that downtrend line might render the break spurious in trading terms, and put focus back on mid-October’s lows in the $148 area. Bulls will probably need to reclaim October ‘s high of $1514.90 if they’re going to stage a more convincing upmove.