USD: Tentative trade in FX markets with major pairs holding relatively tight ranges ahead of this week’s key risk events, in particular the Fed rate decision. The US Dollar is mixed to begin the week amid increased optimism over US-China trade wars stemming from reports that the Phase 1 agreement is almost finalised with President Trump expecting the pact to be signed in time for the APEC summit in Chile (Nov 16-17). Consequently, safe-havens are slightly softer as equity markets and bond yields gain with the S&P 500 opening at an all-time high. On the technical front, support for the USD is situated at 97.50-60.

EUR: Modest outperformance in the Euro to begin the week, having found support around last week’s lows. However, further momentum on the upside has been curbed with a sizeable 1.3bln option expiry situated at 1.11. Alongside this, the near-term direction in the Euro is likely to centre around the Federal Reserve’s guidance as opposed to the rate announcement, given that the markets are priced for another 25bps cut and thus, trading in the Euro may be relatively tepid until Wednesday’s announcement.

GBP: The EU have agreed to accept the UK’s request for an extension with the new deadline now at January 31st, 2020. Although, given that this was widely expected, GBP/USD was unmoved and instead focused on the prospect of a snap-election with government sources highlighting that No 10 could back the SNP and Lib Dems plan for an early election on December 9th. As such, the renewed political uncertainty tied to a snap election could see GBP/USD struggle to extend higher. 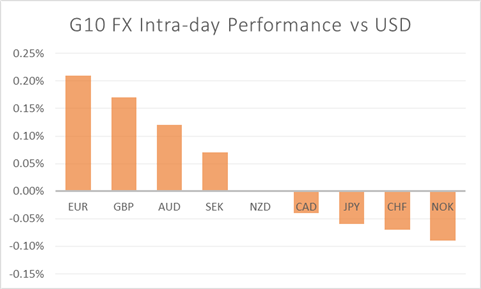