Bitcoin has continued its descent from June highs, suffering a critical break beneath the 200-day moving average in mid-October. Now as the month draws to a close, the cryptocurrency has seen its 50-day and 200-day moving averages converge, with the former looking to dip beneath the latter. Consequently, the resultant death cross – a widely watched bearish indicator – could open the door to further losses for the largest cryptocurrency by market capitalization, if formed. However, in a last-ditch effort to avoid the signal’s formation, Bitcoin surged more than 10% on Friday. 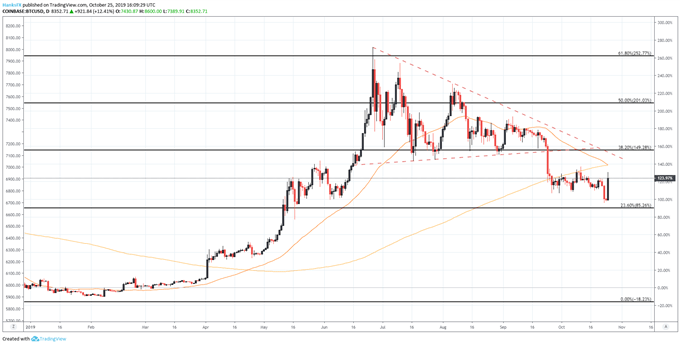 Nevertheless, the odds seem stacked against Bitcoin. As I highlighted two weeks ago when I argued Bitcoin was due for further declines, the bullish case for BTC has weakened considerably. To that end, the coin’s inability to capitalize on a weakening Turkish Lira, typically a bullish development for cryptocurrencies, speaks to a lack bullish appetite which may only worsen with recent technical developments. On the other hand, a reclamation of the 200-day moving average around $9000 could serve to temporarily stall bearish momentum.

Nevertheless, a bearish continuation still seems likely at this time. Aside from the 23.6% Fibonacci level at $7100, nearby support to stall a descent is sparse. Should the isolated technical level fail, Bitcoin could look to target $5500 where a modicum of technical influence from April resides. As bulls and bears continue to battle it out, follow @PeterHanksFX on Twitter for further updates and analysis.