The Swedish Krona and Norwegian Krona will be in for a hectic day as the Riksbank, Norges Bank and ECB all prepare to announce their rate decisions. While all three are largely expected to maintain interest rates at their current levels, the variance in confidence in future growth and policy will likely be a source of volatility. The Norges Bank has been one of the very few to raise interest rates this year – how long can they hold out?

Year-to-date, the Swedish Krona is the worst performing G10 currency with -4.72 percent total returns. Waning demand out of the Eurozone – a key destination for over 70 percent of Sweden’s cross-border sales – has been negatively impacting the export-driven economy. Furthermore, Europe’s political tribulations from Italian debt to Brexit has been sapping business confidence and leaving producers anxious about the future.

Riksbank policymakers have repeatedly re-iterated that uncertainty about Brexit continues to be a major factor impacting monetary policy because of the unknown ripple effect a disorderly divorce could cause. Officials have expressed their intent to raise the repo rate by an additional 25bps either by year-end or the beginning of 2020. However, external forces from trade wars to geopolitical risks may force them to postpone it.

“…members stressed that sentiment has worsened and that the risk of a faster slowdown has increased. This is partly linked to the ongoing trade conflict between the United States and China and uncertainty surrounding the United Kingdom's withdrawal from the EU” – Riksbank September meeting minutes.

A lack of confidence in the central bank’s ability to raise rates has also pressured the Swedish Krona with “forward pricing indicat[ing] a high likelihood of cuts during next year”. There is also the concern about the impact of prolonged periods of ultra-low interest rates. Current economic conditions warrant powerful easing, but there is a risk that this may fuel credit bubbles that could cause a paralytic shock to the financial system.

The Norges Bank has been labelled the “last hawk” in the world of central banks after officials raised rates this year by over 75 basis points from 0.75 percent to its current level at 1.50 percent. Despite facing the same fundamental risks as the Swedish economy, Norway’s petroleum-based economy has managed to stay remarkably resilient in the face of falling crude oil prices and slower economic growth.

However, this has not stopped the depreciation of the Norwegian Krone against its US Dollar and Euro counterparts. On October 18, EUR/NOK clocked in the strongest exchange rate in the pair’s existence at 10.2440. USD/NOK is up over five percent year-to-date despite rate cuts from the Fed and credit tightening from the Norges Bank. 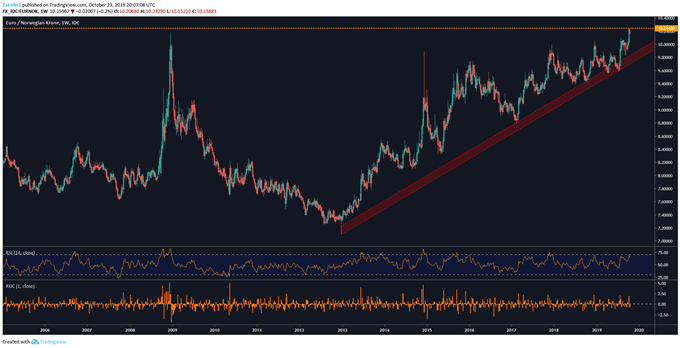 The pair’s rise therefore could then be best explained by a spike in the demand for liquidity amid uncertain times. As the world’s number one reserve currency, the US Dollar prospers when investors panic and prioritize haven-linked assets over their riskier counterparts – like the Norwegian Krone. If global growth prospects continue to deteriorate, the Norges Bank may ultimately capitulate and succumb to the pressure of its peers.

The ECB is expected to hold interest rates at their current levels after they cut rates and reintroduced QE at the most recent meeting. This meeting will also be the last press conference President Mario Draghi will hold as head of the central bank before Christine Laggarde takes the helm. Since markets have priced in a hold on rates, volatility from this event may therefore come from Draghi’s commentary and outlook on the future.