The health and appetite of the American consumer has been called into question after September’s retail sales data fell beneath market expectations. As a key driver of the US economy, an ailing US consumer would seriously undermine a bullish argument for the Dow Jones, Nasdaq and S&P 500 alike – particularly as the nation heads into the holiday season. Thankfully, quarterly earnings from Amazon are due to be released Thursday afternoon, which could offer a more granular look at the developing trends in consumer spending.

To that end, Amazon’s implied volatility has ticked higher ahead of the results. While Amazon shareholders may discount the company’s ability to offer insight on the broader economy in favor of the stock’s price reaction and their portfolios performance, implications on broader consumer trends cannot be understated. Although earnings season is in its early stages, the market has already seen a string of corporations highlight waning demand and higher prices due to the US-China trade war.

This week alone, Harley Davidson, Caterpillar, and Hasbro have issued warning statements regarding future profits. In the case of Hasbro, the company explicitly stated the higher costs associated with tariffs would be passed on to consumers, a concerning development for a toymaker ahead of Black Friday and Christmas. In accordance with the basic laws of supply and demand, higher costs from Hasbro will translate to fewer units sold, even if the appetite of the American consumer has not changed. Consequently, the combination of slowing global growth and tariffs could look to dent consumer spending in the holidays and weigh on the broader market.

As for Amazon specifically, a 15% gain in the year-to-date suggests Wall Street is generally optimistic for the company’s future, but willing to concede its status is not what it once was. Further still, a recent death cross and break beneath the 200-day moving average could suggest selling pressure is in store for the retail giant. Since the break beneath occurred just days ahead of earnings, traders likely held their tongue, unwilling to fall on the wrong side of the quarterly report. 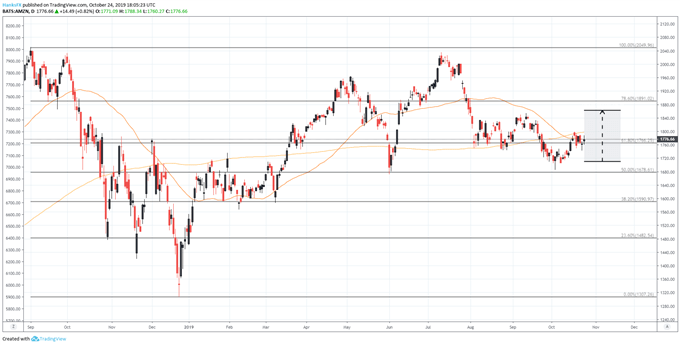 That said, it is more likely a clear-cut trend will emerge once the event risk has passed. An area of support in the larger picture will reside around $1680, while resistance will be offered by the 200-day moving average at $1800 and at the September high around $1850.

In the report, traders should look for any insight on the pricing impact of higher tariffs alongside the company’s outlook for Black Friday and Cyber Monday – which recently overtook the former in terms of total sales. The report will be followed by Friday’s consumer sentiment report from the University of Michigan which often details finer points in the attitude of the average American consumer. For analysis on consumer sentiment, check back at DailyFX or follow @PeterHanksFX on Twitter.

Read more:Dow Jones, Nasdaq 100 and DAX 30 Forecasts for the Week Ahead