Crude oil prices found initial support Wednesday on the preceding US session’s news that more production cute were under consideration by major producing nations. However they soon went into modest reverse.

Concerned about prospects for weak demand growth next year, OPEC and others will consider whether to make deeper reductions than those already agreed when they meet in December. Bulls liked that prospect, but worries about a continued US inventory build constrained the market in Asian time, as did renewed worries about Brexit. The latest deal has been constrained by further political delay in London.

Official US stock levels will be released later in the global day by the Department of Energy from key delivery node Cushing Oklahoma. Crude oil stocks are expected to have risen once again, but gasoline and other product levels may have fallen.

Gold prices remained well supported by both Brexit worries and the prospect of lower US interest rates. The Federal Reserve will give its next monetary policy decision on October 30 with the chances of a quarter-point reduction in the Federal funds rate put at over 90% by the Chicago Mercantile Exchange’s popular ‘Fedwatch’ indicator.

Gold stands to do well in an environment of falling rates as their accompanying lower bond yields increase the comparative attractions of the oldest haven.

Prices have settled into a broad range since the end of September, between $50.94 and $54.92. However, the lower limit of that range is set by only a single intraday low, that of October 3. 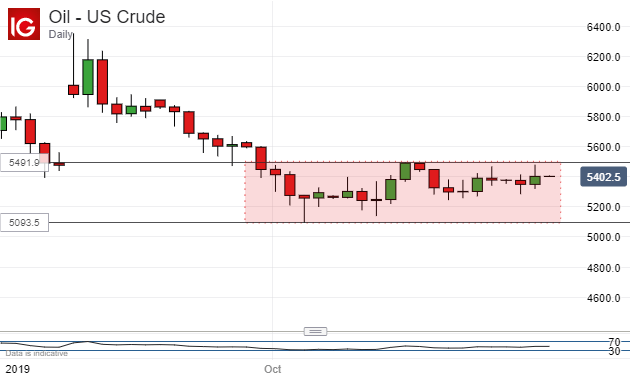 Actual firm support may be a little closer to hand in the $52.37 region which saw a number of daily closes earlier this month. That area will come into sharper focus if the upper bound sees another rejection in the next week or so.

The spot market remains dominated overall by the medium-term downtrend channel which has bounced activity since the peak of September 4.

However, prices have been confined to quite narrow daily ranges since October 11 with another challenge to the channel’s upper boundary looking quite likely in the next week or so. That boundary has already survived three attempts. A fourth may suffer the same fate. However, for as long as support remains firm at current lows then it can’t be ruled out.