Crude oil prices slipped back further in Asian trade Tuesday. The snap-back in risk appetite which propelled US stocks higher in the previous session was tempered again by worries about oversupply in the energy market.

The US and China are still talking on the trade issue, even if lasting resolution remains elusive. Both sides have made encouraging noises and there is some hope that progress could be seen before mid-November’s meeting of the Asia-Pacific Economic Cooperation countries in Chile.

Chinese Vice Foreign Minister Le Yucheng said on Tuesday that some progress has been made and that, as long as there was mutual respect, no difficulty was insurmountable.

Still, Monday’s news that Russia had failed to meet production-cut targets last month continued to hang over the market, as did talks between Saudi Arabia and Kuwait to bring jointly owned oil fields back on-line.

Data this week from the Department of Energy are expected to show that US crude inventories rose for a sixth straight week, although Reuters survey evidence says the market is looking for falls in gasoline stocks.

Gold prices were predictably weaker as investors sought what they hope will be better returns in riskier assets. However, lurking major market worries such as Brexit will keep demand underpinned, while the prospect of lower US interest rates at the end of this month remains very much alive. Lower rates tend to increase the appeal of gold, which has no yield itself.

While clearly still under medium-term pressure and some way below mid-September’s highs, US crude oil prices have managed a shallow uptrend since the start of this month. 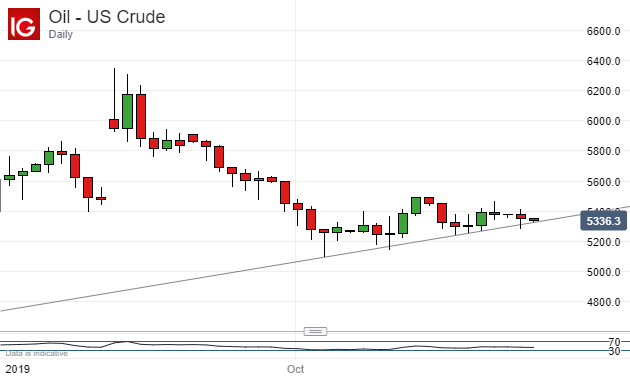 This trend is now in the balance, however, as those oversupply worries persist. A daily close below the line will, if sustained, put October 3’s low of $51.04/barrel back in play, possibly quite soon. Bulls have a lot of work to do but their first target will probably resistance at October 11’s high of $55.07.

With clear exceptions daily gold prices have been confined to quite narrow daily ranges in the past month. This can attest to an uncertain market or a period of consolidation. Uncertainty seems only too plausible given the often-contradictory headline-driven trading impulses provided by both US/China trade story and Brexit.

Whatever the reason behind this narrow trade, it seems to be taking prices ever closer toward their own uptrend line. Sharper falls may be seen below this but in such a risk driven market buyers are likely to re-emerge quite quickly around this month’s low