Earnings season is off to a strong start, with financial stocks JP Morgan (JPM), Citigroup (C), United Healthcare (UNH) and Johnson and Johnson (JNJ) beating out expectations which helped tip the Dow Jones, S&P 500 and the Nasdaq into the green on Tuesday. The advent of yet another quarterly reporting period provides a source of fundamental influence for the stock market, which has recently been juggling trade war and monetary policy drivers. Now, single-stocks have the opportunity to impact the market and Netflix (NFLX) could be a stock with heightened influence.

Recently, Netflix has underperformed its FAANG and Nasdaq peers. This extended underperformance has seen it fall under scrutiny from tech-stock commentators, including the acronym’s creator, Jim Cramer. Just two weeks ago, the market commentator argued the streaming provider should be dropped from the FAANG group and replaced by FAAMG, exchanging Netflix for Microsoft (MSFT). 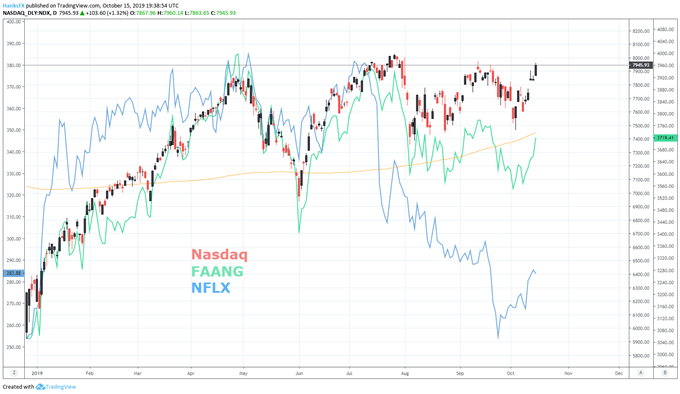 While FAANG’s other members have maintained their status as leaders in the tech space, reflected by their strong stock returns, Netflix has had to battle slowing subscriber growth, growing debt and a series of new entrants into the industry. Disney (DIS), Amazon (AMZN) and Apple (AAPL) are among those entrants, and each stock threatens to erode Netflix’s dominance in the sector. Already, the prospect of greater competition has been reflected in NFLX shares which have climbed just 3% in the year-to-date compared to the 17.5% gain for the entirety of FAANG and the 25% surge for the Nasdaq 100.

Therefore, Wednesday marks a crucial point for the FAANG group. Another dismal report from Netflix could see the collection of tech barometers rearranged as Netflix falls from grace. Evidently, Wall Street is keenly aware of the juncture at which Netflix finds itself as the company’s earnings implied volatility stands at a considerable 11%, more than doubling the implied volatility of IBM who also reports on Wednesday. 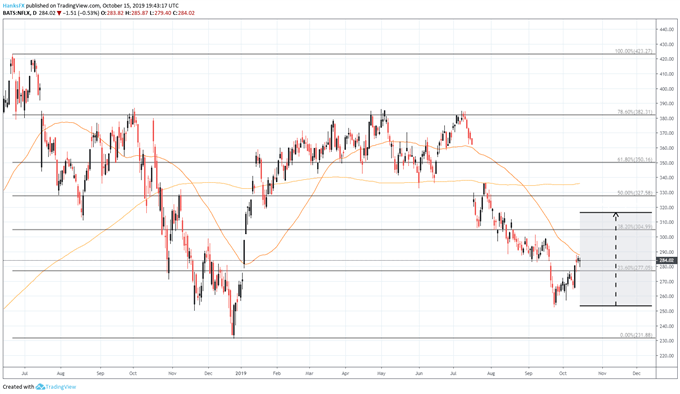 Consequently, a disappointing quarter from Netflix could see shares fall as low as $253, which would drag on the broader Nasdaq 100. On the other hand, any indication that the streaming provider has begun to right the ship could see NFLX shares rip higher, with the upper bound of the implied move residing at $316. As investors await the results and their impact tech sentiment, follow @PeterHanksFX on Twitter for further commentary.