GBPUSD continues to fade last week’s rally and is back below 1.2600, after hitting a 1.2707 peak on Friday, with little progress made in Brexit negotiations over the weekend. The EU is said to want more concessions from the UK, while any deal will still have to pass through Parliament, and that remains unlikely at this point in time. It is looking increasingly likely that the UK will have to request another extension - something PM Johnson is said to be loathed to do – as an agreement ahead of this week’s European Council meeting (Oct 17-18) is looking unlikely. European Commission President Jean-Claude Juncker has said that an extension is available if requested.

UK PM Boris Johnson will unveil the government’s latest legislative agenda in the Queen’s speech around mid-day with over 20 bills expected to be outlined. PM Johnson however does not command a Common’s majority and so his plans may well be voted down. The government announced this morning that a budget will be held on November 6.

Sterling is being marked lower and is unlikely to push substantially higher without any positive Brexit news hitting the screens. GBPUSD is finding support round 1.2580, a level of prior resistance, with this level guarding 38.2% Fibonacci retracement (March 13 – September 3 sell-off) at 1.2503. Below here, the 20-day moving average meets a cluster of old highs and lows around 1.2380. To the upside, the 200-day moving average cuts across the 50% Fib retracement at 1.2670 before last Friday’s multi-month high at 1.2707. Further upside momentum may be crimped by the CCI indicator that shows GBPUSD is overbought at the moment. 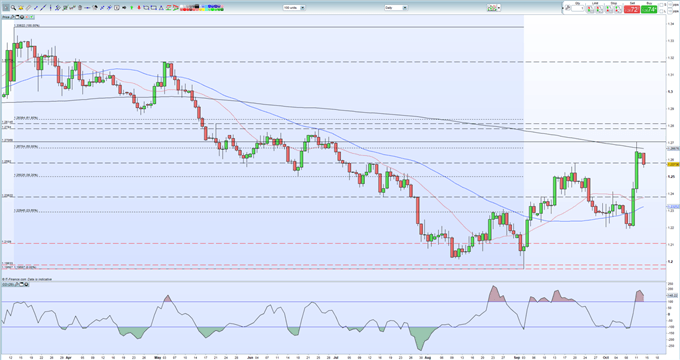