All Asian markets had to face a bunch of apparently conflicting headlines around the US-China trade talks now under way in Washington, so the mixed showing of equity indexes Thursday should perhaps be no surprise.

Things started badly for risk appetite with a South China Morning Post article saying that high-level negotiations including Chinese Vice-Premier Liu He would be cut to just one day. Growth-correlated assets such as stocks and commodity currencies understandably struggled with this news, as investors feared they could hope for little from this week’s much anticipated gathering.

However, a Bloomberg report suggesting that the US was considering offering Beijing a currency pact which could head off tariff rises if agreed helped turn things around for stocks. The possibility that this could be part of an interim deal also helped, as did the New York Times report saying that the White House may allow some US companies to supply Chinese telecom giant Huawei. That firm has been under hostile scrutiny for years because of its associations with the Chinese state.

Investors can at least clearly see that headlines from or around the trade talks are going to be the main drivers of markets around the world as this week bows out.

As the Japanese afternoon session got under way, the Nikkei 225 was up by 0.2%, with gains of similar magnitude evident for the Shanghai Composite and the Hang Seng. Japanese markets managed gains despite news that core machinery orders were down for a second straight month in August.

In Australia the ASX200 returned its morning gains. The index rarely prospers when the big four banks are under pressure and sure enough only one of them, Westpac, was in the green on Thursday. Supply chain logistics name Brambles was the ASX’s big winner, gaining sharply as investors applauded a strong rise in sales revenue, reportedly largely thanks to gains for its US business.

Currencies had a whipsaw session with the pro-cyclical ones on top as the Asian day faded out. The trade pact and Huawei news saw USD/JPY push away quite convincingly from the one-month lows which have formed a formidable barrier to the bears this week. 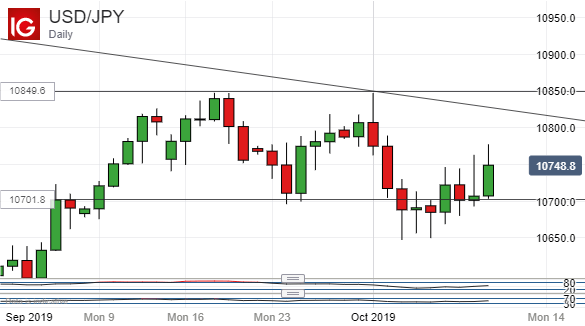 Official US inflation numbers are coming up later in the session, but the markets are likely to remain primarily focused on trade news.