The prospect of a US China trade settlement coming from this week’s high-level talks in Washington DC seemed extremely remote Wednesday, leading to predictable declines in Asia Pacific stocks.

This week’s expansion of the US trade blacklist to include some of China’s most important artificial intelligence names and came in response to allegations of human rights abuses against mainly Muslim minorities. For its part China has said that the US should ‘stop interfering’ and remove the companies as soon as possible.

With negotiations scheduled to begin on Thursday it’s hard to imagine a less conducive backdrop to progress. The US Administration has scheduled an increase in tariffs on another $250 billion of Chinese goods next week, on October 15. The President has said these will be imposed if the talks don’t make progress.

The Nikkei 225 was duly down 0.7%, with Hong Kong’s Hang Seng and Australia’s ASX off by a similar amount. The Shanghai Composite fell 0.1%, while the Kospi was closed for a holiday.

In Australia the big four banks took a tumble, as they generally do when risk appetite is low. Dominos Pizza Enterprises were hit by its US parent’s quarterly update which missed forecasts.

Regional economic data was rather limited but Westpac’s snapshot of Australian consumer confidence found it at four year lows this month, despite the fall in domestic interest rates below 1% for the first time ever.

The US Dollar came under some pressure as trade hopes appeared to wilt, but USD/JPY clawed back some ground through the Asian session, as did the Australian and New Zealand Dollars.

NZD/USD has pulled up a little from the lows of late September, while remaining firmly within its well-established downtrend. 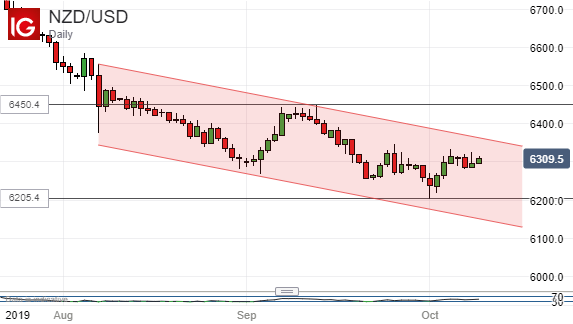 The Australian Dollar exhibits similar action, despite the lack of domestic interest rate support for both currencies, with their markets clearly awaiting this week’s trade news.

The rest of the session will offer the minutes of the last Federal Open Market Committee, with the markets convinced that US interest rates are heading lower, possibly quite soon.