The Australian Dollar struggled Wednesday on news that consumer confidence in its home nation was at a four-year low in October, despite progressive interest rate reductions which took the Official Cash Rate below one percent for the first time this month.

Westpac’s indicator fell 5.5% from September, hugely more than the 1.75% slip expected. The consumer confidence index stands at 92.8, with any score below 100 indicating that pessimists outnumber optimists. This is the worst showing for the series since July 2015. The survey was perhaps even more worrying than it looks at first glance for monetary policy makers at the Reserve Bank of Australia. An interest rate reduction is supposed to boost confidence, especially when it comes to consumers’ expectations and their view of their own finances. October’s reduction in the OCR to 0.75% seems not to have had this effect, to put it mildly.

Westpac noted that both components fell this month, saying the result, ‘will be of concern to the monetary authorities.’ The lender said that consumers’ assessment of economic prospects overall plunged. This may mean that consumers are looking behind lower rates and not liking what they see, either in the global economy or closer to home.

AUD/USD fell quite sharply on the survey’s publication, in start contrast to the relaxed way in which it treated a slide in business confidence barely 24 hours before. 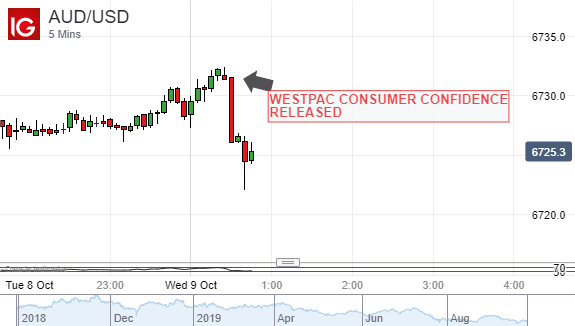 Of course, this market like all others is mainly focused on trade talks between China and the US, a game in which Australia has arguably as much skin as any third country. This focus may have blunted the Westpac data’s impact a little. AUD/USD remains close to eleven-year lows on its daily chart, and well within the long downtrend in place since the end of 2018. This downtrend has been spurred both by heightening global risk aversion and the long decline in Australian interest rates which, the futures market believes, is not over yet. 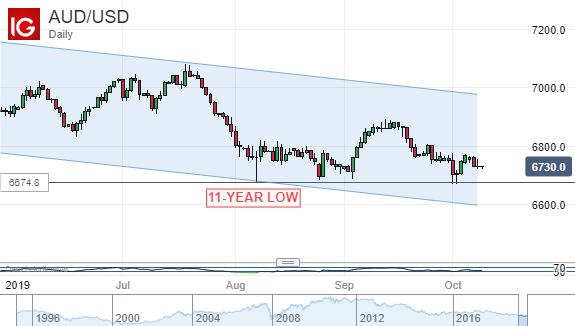 Signs of rapprochement between the two global giants may spur Aussie gains, on a rising tide of risk appetite but, while the currency lacks domestic interest rate support, that downtrend seems likely to hold.