The Australian Dollar was perhaps surprisingly steady on Tuesday as a key indicator of business confidence slipped once again and hit the psychologically important zero level.

National Australia Bank’s closely watched monthly measure fell to that point in September, from just 1 in August. Perceptions of business conditions’ score improved to 2 from 1, but both remain well below their long-term average which is 6.

Business confidence has now returned to the levels seen in March, having been as high as 7 in May. NAB said that the broad-based trend decline seen since mid-2018 may have slowed but that profitability and trading conditions remained below average. Employment remains a bright spot, with its index rising slightly. This mirrors the official data to some extent, even if September’s figures showed unexpected weakness in full-time hiring. 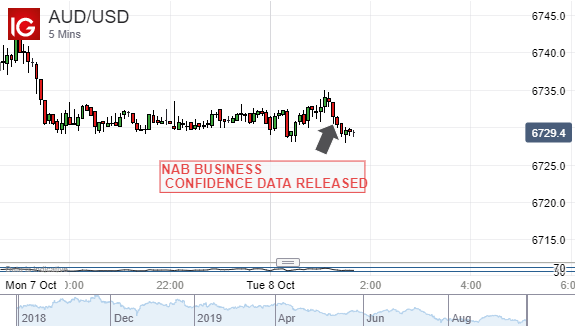 Still, AUD/USD didn’t move much on these figures. August’s surprise confidence fall may have inured investors to a decline in the series, with looming China-US trade talks this week probably further limiting scope for big moves in the runup.

On its broader daily chart, the Aussie remains close to eleven-year lows. The Reserve Bank of Australia is expected to trim the key Official Cash Rate to a new record low of 0.5% by February of next year, with the chance of a move at its November meeting now judged higher than 50% by futures markets. 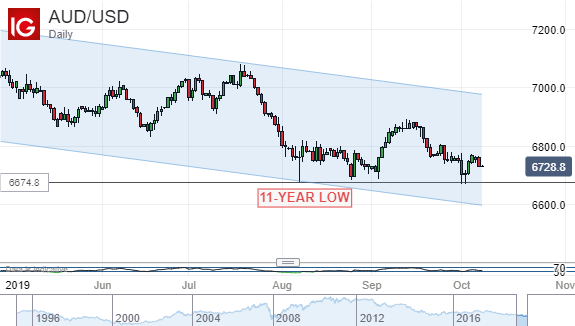 The market has hunkered down some what, and signs of trade progress this week could see all ‘risk assets’ gain, the Australian Dollar included. However, for as long as the currency lacks domestic monetary policy support, it’s hard to see the long downtrend from late 2018 as under serious threar.